Understanding Mind From Matter:
What Does Prehistoric Farming Say About Your Prefrontal Cortex?

To Err Is Human: The Psychological Science of Voting Mistakes

Understanding Mind From Matter: What Does Prehistoric Farming Say About Your Prefrontal Cortex?

When Howard Carter entered the tomb of the Egyptian pharaoh Tutankhamen, he knew he had struck gold. Years of missteps and boondoggles had put the revered archaeologist on the cusp of quitting, but Carter’s persistence paid off. Discovering King Tut’s treasure trove of intact artifacts led to a decade-long excavation that changed the face of modern archaeology. It opened a window into the culture and customs of ancient Egypt.

According to Frederick L. Coolidge and Thomas Wynn (2016), however, archaeologists often ignore the cognitive processes required to construct ancient artifacts. Enter cognitive archaeology — what Coolidge and Wynn define as a new “approach to studying human cognitive evolution that applies theory and concepts developed in the cognitive sciences to archaeological remains of the prehistoric past” (p. 386). The value of King Tut’s sarcophagus may lie not only in its weight in gold, but also in understanding the complex cognitive processes humans would have needed in order to make it.

Coolidge and Wynn propose a four-part model that explains the basics of cognitive archaeology:

The second and third steps are tricky: Early humans had no libraries or social media, leaving modern scientists with little access to shared information about how to build the artifacts. Scientists often do the painstaking work of reverse-engineering ancient artifacts by experimenting with the procedures and knowledge that may have been available to our evolutionary ancestors (Stout, Schick, & Toth, 2009; Wadley, 2010).

To take this cutting-edge science into the classroom, students can complete the following activity, which illustrates how physical artifacts can help psychologists understand the psychological processes needed to produce such artifacts. Time permitting, instructors can cover one or two artifacts. In these situations, I often divide the class into two large sections and assign one topic to each section.

Begin by showing students Figure 1 from Coolidge and Wynn (2016; below).

Walk students through each component of Coolidge and Wynn’s model. Next, have students form groups of three and encourage them to discuss a series of questions related to each of the following topics. To increase engagement, instructors may encourage students to use their smartphones and create a Twitter hashtag (#) that will help organize the class’s responses. You can use a large screen to display the Twitter feed. Ask the class to create the hashtag. Encourage them to use their creativity and humor. My students once created the hashtag #offdewall to curate their in-class Twitter responses. We had a good laugh.

Topic 1: Why Don’t We Sleep in Trees?

Topic 2: What Does Prehistoric Farming Say About Your Prefrontal Cortex?

Archaeology makes sense of human activity from the materials ancient humans left behind. An ancient spear can tell us where people lived, what they did, where they went (or didn’t), and when and why that movement happened. Cognitive archaeology tries to get into the minds of ancient
spear-makers. By understanding the cognitive processes necessary to make certain artifacts, cognitive archaeologists can better grasp how our evolutionary ancestors thought, felt, and acted.

To Err Is Human: The Psychological Science of Voting Mistakes

Egocentrism — difficulty in taking another’s perspective — is not just for preschoolers. We adults, too, can easily overestimate the extent to which others share our understandings. By assuming that what’s clear to us also will be clear to others, we often exhibit “the curse of knowledge.” Some examples:

Such “human perceptual and cognitive limitations also pose a serious and immediate threat” to democracy’s voting systems, note Philip Kortum and Michael Byrne (2016). In case after case, the people who design and word ballots assume that what’s clear to them will be similarly clear to all voters. Thus, when the Palm Beach County elections supervisor designed the infamous “butterfly ballot” for the 2000 election, it was perfectly clear to her that those favoring the second set of candidates should punch the third hole from the top. Alas, voter confusion caused enough Gore voters to punch Buchanan to flip the state outcome — and the presidency — from Gore to Bush … thus altering the course of history (Fig. 1).

In addition to such perceptual fiascoes, Kortum and Byrne also note that voting procedures can yield ambiguously marked ballots. After 2.8 million Minnesotans chose between US Senate candidates Al Franken and Norm Coleman, fewer than 300 votes separated the candidates. The recount of several thousand ballots, such as the one shown in Figure 2, swung the vote to Franken. 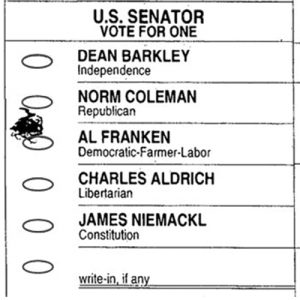 To illustrate the perceptual psychology of voting, instructors may wish to visit tinyurl.com/ballotpsychology, where they will find sample ballots created by Kortum and his colleagues and a scale for assessing their usability. Responding to several of the layouts will illustrate both clear and unclear alternative designs (civicdesign.org/fieldguides offers guidelines for clear ballots).

For a second activity, tinyurl.com/ballotpsychology2 will take students to a Minnesota Public Radio website that invites students to judge Franken versus Coleman voter intentions, and then to compare their judgments with those of more than 100,000 other respondents.

In the spirit of the Kortum–Byrne essay, instructors could invite students to identify other ways in which humans routinely exhibit either Murphy’s Law (anything that can go wrong, will go wrong) or the curse of knowledge. Three examples:

Auditory processing. Hearing, like vision, occurs top-down as well as bottom-up. Therefore, misperceptions can color hearing, leading listeners to mishear what speakers perceive themselves as having plainly said.

It’s a phenomenon that, as a person with hearing loss, I frequently experience. At a recent advisory council meeting of the National Institutes of Health’s National Institute on Deafness and Other Communication Disorders, I was surprised to hear one of its executives repeatedly mention the Institute’s “missionaries.” Who are these people, I wondered — evangelists for hearing health? On about the fifth utterance, I recomputed: mission areas.

Much as Norwegians can tell Norwegian jokes to one another, so the hearing-loss community laughs over its own faux pas, as in the story of the three golfers with hearing loss. “It’s windy,” remarks one. “No,” says the second, “it’s Thursday.” “Me, too,” says the third. “Let’s go get a drink.”

But it’s not just people with hearing loss. Depending on the context (such as happy or sad music playing), our meaning-making brains may mishear “morning” as “mourning,” “dye” as “die,” or “pane” as “pain” (Halberstadt, Niedenthal, & Kushner, 1995).

The power of framing. More than many people suppose, the mere wording of a proposition can shift people’s expressed views. Voters have been more supportive of “assistance to the poor” than “welfare” (Time, 1994). They have favored cutting “foreign aid” but increasing spending “to help hungry people in other nations” (Simon, 1996). “Gun safety” initiatives, such as requiring background checks, elicit more public support than “gun control” (Steinhauer, 2015).

Misreadings. “The curse of knowledge is the single best explanation I know of why good people write bad prose,” observes APS William James Fellow Steven A. Pinker (2014, p. 61). “It simply doesn’t occur to the writer that her readers don’t know what she knows.”

Readers’ misunderstandings or misinterpretations of my own written words led me to create Myers’s first law of writing: Whatever can be misunderstood, will be, and its corollary second law of writing: The reader is always right. (If I am misread, the problem lies with the writing, not with the reader.)

The list of ways in which humans perceive or believe incorrectly goes on. Our thinking, while often accurate and generally adaptive, is vulnerable to perceptual set, selective inattention, change blindness, stereotyping, confirmation bias, belief perseverance, overconfidence, self-serving bias, overreliance on heuristics, false consensus, illusory correlations, priming effects, and much more. And that is why Kortum and Byrne are surely right to remind us that “human perceptual and cognitive limitations” can distort voting and to recommend universal ballot design principles that accommodate the human factor.

Steinhauer, J. (2015, January 2). Fight on guns is being taken to state ballots. The New York Times. Retrieved from https://www.nytimes.com/2015/01/03/us/gun-control-groups-blocked-in-washington-turn-attention-to-states.html?_r=0

C. Nathan DeWall is a professor of psychology at the University of Kentucky. His research interests include social acceptance and rejection, self-control, and aggression. DeWall can be contacted at nathan.dewall@uky.edu.
APS Fellow David G. Myers is a professor of psychology at Hope College. His scientific writing has appeared in three dozen academic periodicals, and he has authored or coauthored 17 books, including Psychology (11th ed.), Exploring Psychology (9th ed.), and Social Psychology (12th ed.). Myers can be contacted via his website at www.davidmyers.org.