C. Nathan DeWall, University of Kentucky, and renowned textbook author and APS Fellow David G. Myers, Hope College, have teamed up to create a new series of Observer columns aimed at integrating cutting-edge psychological science into the classroom. Each column will offer advice and how-to guidance about teaching a particular area of research or topic in psychological science that has been the focus of an article in the APS journal Current Directions in Psychological Science. Current Directions is a peer-reviewed bi-monthly journal featuring reviews by leading experts covering all of scientific psychology and its applications and allowing readers to stay apprised of important developments across subfields beyond their areas of expertise. Its articles are written to be accessible to non-experts, making them ideally suited for use in the classroom.

Understanding the Science Behind Desire

Understanding the Science Behind Desire

Think of your greatest heroes from the past 100 years. Maybe they include Albert Einstein, Oprah Winfrey, Michael Phelps, Nelson Mandela, Sally Ride, Steve Jobs, Hillary Clinton, Martin Luther King, Jr., or the Beatles. We place them on pedestals, but these people bear little resemblance to each other. One thing they all share is a common human strength: self-control. They persisted when success seemed impossible. They turned the other cheek instead of lashing out. They prized future benefits over immediate pleasure. And their self-control paid off handsomely. They won Nobel Prizes, overthrew apartheid, changed unjust laws, explored space, shaped global affairs, and transformed technology and music.

But according to Wilhelm Hofmann and Lotte Van Dillen (2012), this analysis sidesteps a crucial component that contributed to our heroes’ achievements. Without understanding their desires — those urges that thrust us toward people, actions, or places in the hopes of attaining some reward or escaping from punishment — we grasp only half their recipe for success. When desires collide with goals or norms, they give rise to temptations. A tasty donut tempts us only if we need to resist eating it. Desires arise effortlessly and, in many cases, without us knowing it.

Having awareness of your desire represents a crucial first step in getting control over your responses. For example, Hofmann, Kathleen Vohs, and Roy Baumeister (2012) recently showed that people desire to use media devices, such as smartphones, more than they may realize. To bring this research into the classroom, Hofmann suggests “having people get out their smartphones and put them in front of them for a couple of minutes without allowing them to touch them” (Hofmann, personal communication). By becoming aware of how often their phones “call” out to them, Hofmann argues, students can “navigate through their desire worlds in more fulfilling ways.”

In our experience, students love to talk about their desires and temptations. To bring this cutting-edge research to the classroom, instructors may challenge students to consider things they desire that don’t tempt them. Some students might desire a fresh loaf of wheat bread. They won’t fail to achieve a personal goal if they eat it. Celiac-disease-afflicted students, in contrast, might enjoy the smells of baked wheat bread wafting through the kitchen. But they will fail to live up to their personal health goals if they take a bite.

A slightly more controversial activity may involve asking students to consider how people limit their temptations. Health-conscious people keep fatty foods out of the house. Unfaithful partners avoid exotic dance clubs in the hope of rebuilding their marriages. Compulsive gamblers take an alternate route home to avoid seeing the casino or horse track. Hofmann and Van Dillen congratulate people who take this approach. Drawing on their own and others’ research, they state that “the most effective strategy to prevent desire is to avoid exposure to tempting situations and stimuli altogether” (p. 320).

Another kind of strategy is seen when people deal with their temptations by changing their minds instead of their environments or by channeling their desire toward more acceptable alternatives. It isn’t hard to get people to look at attractive others, but redirecting people’s attention to tempting alternatives can backfire by making those alternatives “forbidden fruit” (DeWall et al., 2011).

Are there universal temptations? People share common desires for food, water, shelter, safety, and relationships. The question is whether these desires translate into temptations. Here’s a classroom exercise that has proven effective in illustrating some of the concepts relating to self-control. Ask students to form groups and discuss what they desire most often. Next, write some of the responses on the board to get an idea of what desires the class shares. Then throw them two curveballs.

The first deals with cultural similarities and differences in desires. Ask the students to consider which of their desires extend to other countries. Also inquire whether their desires may change in rural versus urban settings. Many students list pizza as something they desire. When I (CND) tell them of my teaching experience in rural China 2 years ago and how many students had never eaten pizza, they experience a better understanding of how some of their desires may not extend beyond their own country’s borders.

The second question that throws students involves temptations. As we look at the class’s list of desires, we consider whether they tempt every class member. Why might running represent a source of temptation for some students and not others? We also discuss potential cross-cultural differences in temptations. Students share their experiences with international travel or interactions with people from other countries. Embracing diversity of culture and opinion, this activity sheds light on what can be gained by taking a cross-cultural approach to understanding the ins and outs of self-control.

Given the complexity of human behavior, it can be difficult to identify factors that affect it so consistently that they can confidently be labeled as laws or principles.”

Class discussion could extend this top-of-the-head list, to which Carpenter adds one more, the oft-demonstrated testing effect: “Taking a test on learned information, compared with simply restudying it, renders the information more likely to be remembered.” Thus, for example, English speakers given a French-English phrase such as le chien — dog remember the association better if it’s followed by a retrieval attempt (le chien — ?) rather than restudy (le chien — dog). 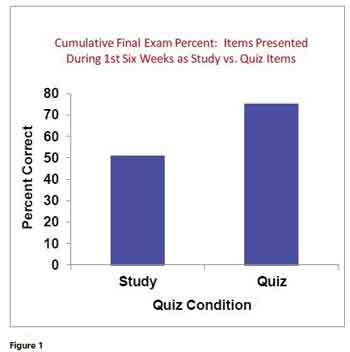 Carpenter shows that testing also “enhances the transfer of learning.” The testing effect, she reports, generalizes across time, testing format (such as cued vs. free recall), and knowledge domain. It is robust and has been widely studied and applied. There are several exemplary articles and resources that can support student discussion of the testing effect.

Henry L. Roediger, III, one of the leading researchers in this area, discussed research on the teaching effect in his 2012 APS William James Fellow Award Address on “Cognitive Enhancement of Education: From the Lab to the Classroom.”

Roediger paid tribute to William James, whose 1890 Principles of Psychology declared that “It pays better to wait and recollect by an effort from within, than to look at the book again. If we recover the words in the former way, we shall probably know them the next time; if in the latter way, we shall very likely need the book once more.”

As Roediger and his colleague Jeffrey Karpicke (2006) have written, “Testing is a powerful means of improving learning, not just assessing it.” Repeated, spaced self-testing, with material of “desirable difficulty” and with immediate feedback, boosts retention. Thus, advised Roediger in concluding his APS lecture, teachers should use “constant assessment.” When they do, “students study more, monitor their knowledge better, learn more and retain more for the long term.” For more, see Roediger’s website on “Test-Enhanced Learning in the Classroom.”

Other researchers — Mark McDaniel and Kathleen McDermott (Washington University in St. Louis), Gordon Hodge (University of New Mexico), Gilles Einstein (Furman University), and Victor Benassi (University of New Hampshire) — have confirmed the benefits of retrieval practice in actual classroom situations — benefits that instructors can apply to their teaching and students to their learning. Moreover, the testing effect is nonobvious. When Jeffrey Karpicke and his colleagues (2009) asked students what activities lead to learning, common answers included rereading, highlighting, and reviewing class notes.

Gilles Einstein and his colleagues (2012) demonstrated the testing effect by having students read material using either a Study-Study or Study-Test strategy. Their quiz performance a week later demonstrated the testing benefit, which the students then described in a lab report. At the end of the term, these students reported incorporating more self-testing into their studying.

In an unpublished study, Victor Benassi and his colleagues at the University of New Hampshire gave introductory psychology students frequent in-class quizzes on assigned readings. For some of the items, the answers were provided along with the question (Study Trials). For other items, students were asked to try to recall the answer (Quiz Trials). When tested on a final exam, the testing benefit on multiple-choice application questions was evident (Figure 1). Students performed much better on questions that had been “tested” on quizzes earlier in the course.

To introduce students to the testing effect and its power to boost their own learning, we offer a 5-minute animation, “Make Things Memorable! How to Study and Learn More Effectively.” It’s freely available for classroom or student use at tinyurl.com/HowToRemember.

APS Fellow David G. Myers is a professor of psychology at Hope College. His scientific writing has appeared in three dozen academic periodicals, and he has published 17 books, including Psychology (10th ed.), Exploring Psychology (9th ed.), and Social Psychology (11th ed.). Myers can be contacted via his website at www.davidmyers.org.

An avid reader of Current Directions in Psychological Science steps up as Editor of the APS journal. More