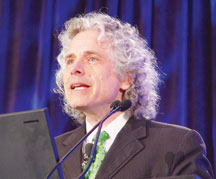 Imagine you’re at the hottest restaurant in Manhattan on a Saturday night. It’s crowded and there’s a long line of people waiting. Few of us, no matter how hungry we are, would directly come out and offer the maitre d’ $20 for a table. However, we may be more willing to quickly (and hopefully smoothly) flash the $20 bill and say something along the lines of, “I was wondering if you might have a cancellation.” The maitre d’ is no fool and it’s obvious in both scenarios what’s really going on, so why do we insist on this charade and an “if you catch my drift” approach? According to this year’s Psi Chi Distinguished Speaker, APS Fellow and Charter Member Steven Pinker of Harvard University, using indirect speech (that is, veiling our true intentions in innuendos and euphemisms) can reveal a lot about social life. In addition, it exposes a paradox in our attitude toward conversation. Pinker observes, “No matter how much we profess a desire for people to say what they mean, we use — and expect people to use — indirect speech.”

The difference between eating food off of our spouse’s plate and our boss’s plate may be obvious, but not all of our relationships have such clear boundaries. If you sell your best friend your car, negotiating a price can put a strain on the friendship, because it involves the rules of reciprocity, whereas a friendship is governed by communality. The use of innuendos or euphemisms may be a way of avoiding such awkwardness — for example, inquiring of the maitre d’ whether there is a cancellation respects his dominance in his place of work, rather than switching the relationship to reciprocity, while still conveying the intended offer.

Alluding to the subtitle of his book The Stuff of Thought, Pinker concluded, “And that’s just one of the ways that language can serve as a window into human nature.”