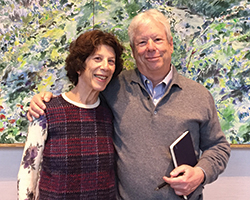 University of Chicago economist Richard H. Thaler, whose work has roots in the groundbreaking research of APS William James Fellows Daniel Kahneman and Amos Tversky, received the Nobel Prize in Economic Sciences on December 10 from King Carl XVI Gustaf of Sweden. Thaler collaborated extensively with Kahneman, who himself received the Nobel Prize in Economics in 2002 and the Presidential Medal of Freedom in 2013, as well as with Tversky, who passed away in 1996, to show that irrational decision-making stems from a human tendency toward certain cognitive biases. His findings have inspired many governments and organizations to inject more behavioral research and economics into policymaking. Among those attending the Nobel Prize ceremonies in Stockholm to support Thaler were APS President-Elect Barbara Tversky (pictured with Thaler at a recent scientific conference); Kahneman; APS Fellows Eldar Shafir of Princeton University and Maya Bar-Hillel of Hebrew University of Jerusalem; and Harvard University law professor Cass Sunstein, Thaler’s co-author on the acclaimed 2008 book Nudge: Improving Decisions About Health, Wealth, and Happiness.