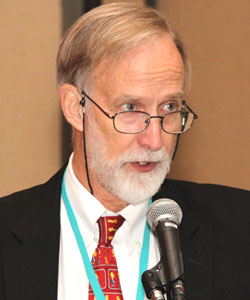 William E. Pelham points out in his SSCP Distinguished Scientist Address that kids with ADHD have problems that are just as big on the baseball field as in the classroom.

With 10 percent of American children suffering from it, attention deficit hyperactivity disorder (or ADHD) is the most common behavior problem in American schools. The total estimate for the public health cost to American society is over $42 billion, which is roughly the same cost as major depressive disorder. Seven percent of U.S. children take some form of psychiatric medication and nearly all of those medications are part of treatment for ADHD.

At the 24th APS Annual Convention, several experts discussed the neuroscience, the public policy, and the clinical science of ADHD. William E. Pelham from Florida International University asked, “Are We Overmedicating America’s Children?” in his SSCP Distinguished Scientist Award Address.  “Even though we know almost nothing about the long-term effects of medication on these kids, it continues to be the first-line treatment,” he said.

Rather than targeting symptoms, which is the point of stimulant medication, Pelham said, an alternative and empirically proven strategy is to focus on what he refers to as “the four domains of functioning”: peer relationships, parenting, family relationships, and academic achievement. Looking at these “domains” he has focused on minimizing impairment in daily life. “The goal of treatment is not the elimination of symptoms,” he said. “It is addressing the problem in daily-life functioning.”

Pelham prefers to focus on behavioral interventions, with medication as an adjunct to treatment. In a summer camp setting, his research team examined the effects of various levels of behavior modification — none, low intensity, and high intensity — with drugs, no drugs, and parent training. They tracked the children throughout the school year and found that even a minimal amount of behavioral modification paired with parent training made a positive difference.

For many mental-health disorders, medication has become a silver bullet for eliminating symptoms. And the history of ADHD medication is no different.

According to Rick Mayes, a political scientist and professor of public policy from the University of Richmond who spoke in the Invited Symposium “Current Directions in ADHD Research,” the stimulant medication Ritalin was developed in 1955. Initially, Ritalin was prescribed as an antidepressant for adults, but in the 1960s it was first tried on ‘problem’ children with surprising and positive results. Since then, the story of ADHD has become inextricably connected to medication.

In the early 1990s, some policy changes led to an explosion of prescriptions for stimulant medication. Social Security for low-income people expanded to include payments for mental disorders; the diagnosis of ADHD was formalized; and the 1991 Individuals with Disabilities Act included ADHD and Autism.

This began what Mayes described as “a timeless quandary, a diagnostic triangle, involving a parent who has been often pushed by a teacher, a physician, and the child in the middle of bioethical issues.”

Psychological scientists — as well as many doctors and parents — may also be hesitant about medication because researchers still do not fully understand the biochemistry and brain functions underlying ADHD. To that effect, Tiago V. Maia from Columbia University presented research on the way that neurotransmitters function in the ADHD brain.

“Ultimately, we are most interested in what is going on in behavior, but we are examining the synaptic level where the medications work,” Maia said. Dopamine is usually the favorite neurotransmitter for researchers because the conventional wisdom is that stimulant medication works on dopamine. But in fact, through neurocomputational modeling and neuroimaging studies, Maia has found that these medications have a greater effect on norepinephrine. In addition, her research team found low norepinephrine levels produce many of the neuropsychiatric deficits that characterize ADHD, such as slow reaction times.

The brain processes that keep us organized and help us prioritize various situations with order and agility are known as executive function. One characteristic of children with ADHD is that the part of their brain responsible for executive function is compromised, partly due to this deficit of norepinephrine. As a result, when they should react with speed and clarity, they respond slowly and with uncertainty. But executive function is not simple and self-contained. “It is not unitary, but rather complicated,” said Cynthia Huang-Pollock from Pennsylvania State University.

In her presentation, “Integrating Common Cognitive Phenomena in ADHD,” she explained that those with ADHD experience basic and important changes in processing speed and working memory. When someone is able to process information quickly (i.e., when executive function is speedy) then more mental resources are available for storage in working memory. The more compromised the processing, the slower the cognition, the greater the demands on the brain, and the fewer resources are available for working memory. “This may mean that ADHD-related deficits start at a more fundamental level,” she said.

One way these deficits are expressed is that children with ADHD typically have great difficulty in both following and creating linear narratives. Richard Milich, from the University of Kentucky, examined what this difficulty reveals about the disorder and how the creation of narratives sheds light on some of the problems that these children encounter in school.

“It is very easy to demonstrate that children with ADHD have significant academic problems, but what surprised us was what little attention has been paid to narrative comprehension or story comprehension,” Milich said. “It independently predicts academic performance.”

In studying children for over 20 years, he found that the ability to make inferences, which is the ability to understand cause and effect, is one of the most important aspects of story comprehension. Children were shown a television show with a rather complex story line. The tape was stopped five times, and the children were asked what they thought was going to happen. Children with ADHD were not able to create the same number and types of inferences as their peers. The next level of research will be to see if interventions could help children make more appropriate inferences.

Today, stimulant medication circulates on college campuses much like beer and marijuana. It has become a part of the culture. But more significant is the fact that an entirely new market for these drugs that has burgeoned. “Now the debate and the controversy has shifted from children to adults,” Mayes said. Especially women: One quarter of adult American women are on some form of psychiatric medication, and the biggest increase is in prescriptions for Ritalin.