Interesting and important psychological research is published every day around the world, yet the rumor is that most psychology journal articles are read by an average of six people. Psychological research spans multiple disciplines, advances our understanding of human behavior, and offers relevant insight for everyday life. So why does only a small fraction of the valuable information studied by psychological scientists reach a broader audience? Psychology in Action, a student-run organization at the University of California, Los Angeles, is extending the reach of psychological science by helping graduate students learn a skill that is crucial for scientists in the 21st century — how to communicate scientific ideas to the public. 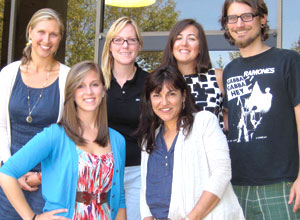 Scientists who know how to communicate well tend to make an impact: They influence funding priorities, policymakers, and even scientists outside their field. Yet the skills required to share findings with a broad audience are not necessarily taught in graduate school. Graduate students learn how to write up their findings for peer-reviewed publications, which means allowing for alternative explanations, pointing out methodological concerns, and taking time to discuss how the findings fit within the broader literature. In contrast, writing for people outside the academic community requires distilling difficult concepts into easy-to-understand summaries as well as squeezing the findings and implications into a few paragraphs. This mode of writing requires practice and engagement, and our group provides UCLA students an opportunity to develop this expertise.

Our group was founded by Adi Jaffe in 2007 when he was a graduate student at UCLA. Jaffe heard a science reporter speak at a talk organized by UCLA developmental psychologist Jaana Juvonen. Both Jaffe and Juvonen recognized the need to help psychology students learn to communicate important findings to community members and other interested parties outside of the academic community. From that talk, they were inspired to create a Web site where students could blog about psychological research for a nonacademic audience. A few months later, the Psychology in Action Web site went live.

Today, our group has over 30 graduate-student members from various psychological science disciplines, including developmental, social, cognitive, clinical, and health. At least once a week, our members post a short blog article about cutting-edge psychological research. In addition, we participate in outreach activities, such as holding discussions with high-school students about the relevance of psychological research to everyday life. We also produce quarterly newsletters.

Last year, the UCLA Psychology Department recognized how important Psychology in Action was and provided our group with funding and a prominent link on the department Web site. Their investment in us paid off. Public interest in Psychology in Action grew from an average of 350 page views per month to over 5,000. Readers visit the site from all over the world, and the Web site has also been expanded to include sections on faculty research from UCLA, outreach events, and information for people interested in pursuing a career in psychology.

Some of our members have also used the valuable skills they learned from Psychology in Action to enhance their careers. For example, Alexandra Dupont was asked to write a piece for the magazine Student Health 101 because of her experience writing for Psychology in Action blog; Keely Muscatell, using the public speaking skills she practiced in our outreach efforts, traveled to the California State Legislature in Sacramento to advocate for graduate education and research; and one of my blog posts on cyberbullying was reprinted in a textbook.

Looking to the future, our organization plans to increase its impact by providing more learning opportunities, such as talks given by well-known bloggers, for our contributors as well as for other members of the Los Angeles community. We also plan to reach more readers through a YouTube channel and other social-media outlets. Another exciting initiative is a potential partnership with UCLA’s film and television department to discuss how films and television use psychology in their storytelling. By bringing together psychologists and filmmakers in the heart of Hollywood, we hope to create a dialogue between those who portray human behavior and those who study it.

As Shelley Taylor wrote in her often-cited article “We’re Not Just Speaking to Ourselves Anymore” in the January 2009 issue of Perspectives on Psychological Science, “If you don’t control what is said, you don’t control what is read.” By giving graduate students the opportunity to learn and practice communication skills beyond the ivory tower, Psychology in Action is teaching future scientists how to create accessible communication in today’s media-saturated society.

For more on Psychology in Action visit: www.psychologyinaction.org

Observer > 2011 > December > Psychological Science For All

Good work, and well-written! I once talked to Daniel C. Dennett (name-drop much?) about more or less this same issue. We were discussing what was then the new and sudden proliferation of popular books about science—books by himself, Steven J. Gould, Stephen Hawking, Richard Dawkins, and all their ilk. He told me a secret—that academic science writing is often not only obscure ACROSS disciplines but WITHIN them. Nobody understands them. The popular level, he said, is “the right level for EVERYBODY.”

Yalda T. Uhls is a doctoral student in the developmental psychology program at UCLA as well as the current President of Psychology in Action. Her research, conducted with the Children’s Digital Media Center@LA, focuses on the effects of media on tween children.