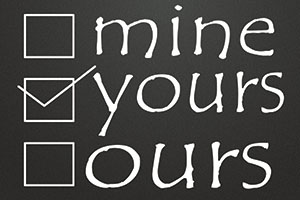 Ownership influences how people use objects — you are allowed to use your own car, but it’s usually wrong to use anyone else’s, at least without permission. And ownership also has important social consequences. Although your neighbor might be surprised if you spray-painted your own car, she’d be enraged if you did this to her car, and other people would probably see the situation her way.

Ownership is at the heart of many actions, including buying, borrowing, and stealing. Because of this, appreciating ownership is crucial for understanding and predicting everyday actions and events. If you didn’t appreciate ownership, you wouldn’t understand why your neighbor picks flowers from her own garden but leaves yours alone, and you couldn’t anticipate her anger if you spray-painted her car.

These considerations highlight the importance of ownership in daily life. But what is ownership?

Rules of the Road

One possibility is that ownership is similar to traffic rules. Traffic rules are products of human culture and law instituted to ensure that traffic flows smoothly and to avoid road accidents. Drivers and pedestrians are expected to follow traffic rules, and those who don’t can face punishment or sanction.

Ownership might likewise be a cultural and legal invention, perhaps instituted to reduce conflicts over objects and again creating the expectation that people follow a set of rules.

This view of ownership leads to straightforward predictions about how young children come to appreciate ownership. If the concept is a cultural or legal invention, young children should begin with no expectations about it, much as they initially have no expectations about traffic rules. As they get older, children might gradually come to learn more about ownership by observing and interacting with people already knowledgeable about it. Casual observation of young children might seem consistent with this developmental picture, because very young children often do seem unaware of ownership and its importance. They often fight over toys, and they notoriously claim things (“Mine!”) that don’t actually belong to them.

However, recent experimental findings suggest otherwise: Young children do appreciate ownership. For example, at age 2 children can already identify who owns an object, and although they sometimes claim ownership over things that are not theirs, usually their ownership claims are accurate. Two-year-olds learn about who owns an object from verbal statements, and they also often assume that an object belongs to the first person known to physically possess it. At age 3, children understand some transfers of ownership, and they know more ways of identifying who owns an object. For instance, they use age and gender stereotypes to identify owners — they are more likely to say that car keys belong to an adult than to a child, and that a doll belongs to a girl than to a boy.

Tracing the History of an Object

Although young children use many different cues to identify the owners of objects, these judgments may often depend on a broader understanding that ownership of an object depends on its history. For example, to identify who owns one of three identical objects, children consider the object’s history and recall who was given ownership of it earlier. Likewise, young children’s assumptions that an object belongs to the first person known to physically possess it may rest on the inference that this person acquired ownership of the object earlier. Consistent with this, children age 4 and older infer historical events when asked to explain instances of ownership. For example, when asked why a painting belongs to a girl or why a rock belongs to a boy, they suggest that the girl made the painting and that the boy found the rock. These findings suggest that rather than learning about ownership gradually and in a piecemeal fashion (the way we might learn about traffic rules), young children’s thinking about ownership may primarily depend on a few broad principles.

Young children’s early appreciation of ownership is also supported by their understanding that owners have rights over their property. In one experiment, children ages 2 and 3 watched as a puppet threatened to take an object or throw it in the garbage. Children did not mind this when the object belonged to the puppet. But children at both ages protested the puppet’s behavior when the object was theirs, and the 3-year-olds also protested when it belonged to some other person. These findings show that young children defend not only their own ownership rights, but even the ownership rights of others.

In fact, children may even give more priority to ownership rights than do adults. In a series of experiments, children ages 3 to 7 and adults were told stories about property disputes. In one story, a girl was using a crayon to make a card. However, the crayon belonged to a boy, and he wanted it back. When deciding who should prevail, children at all ages mostly judged that the crayon should go to its owner, the boy; however, many adults instead chose the girl, who was currently using it. This difference between children and adults was greatly reduced in stories where the crayon belonged to neither of the characters and instead belonged to their teacher. Children and adults both said that the girl using the crayon should keep it. Together these findings show that young children care about ownership’s role in resolving disputes and that they may give more weight to ownership than do adults, who incorporate other factors into their decisions. But this is the opposite of what would be expected if children learned about the importance of ownership from adults.

Perhaps ownership isn’t just a product of culture and law, and might instead have a more natural basis. Our sense of ownership could be connected to animals’ territorial behavior, or it could emerge from a more basic appreciation of bodily rights. We normally judge that it’s wrong to manipulate other people’s bodies, at least without permission — you shouldn’t step on your neighbor’s foot or try to paint her toenails, unless she happens to consent. Such judgments are very similar to those about ownership rights, such as the judgment that you shouldn’t spray-paint your neighbor’s car without permission. Given such similarities between our appreciation of bodily rights and ownership rights, it could be that much of our appreciation of ownership derives from our sense of bodily rights.

Consistent with this possibility, recent findings reveal striking parallels between judgments regarding actions directed at bodies and objects. In one study, 4-year-olds and adults were told stories in which an “agent” acted on another person’s body or on the other person’s property. For example, a boy either touched a girl’s hair or touched her teddy bear. If people conceive of ownership rights and bodily rights differently, their judgments about the permissibility of such actions should differ depending on whether the boy’s actions are directed at the girl’s hair or at her teddy bear. But no differences were found: The children and adults judged actions to be permissible when the girl approved of them and impermissible when the girl disapproved. But whether the actions targeted the girl’s hair or her teddy bear didn’t matter.

These findings suggest that children view bodily rights and ownership rights similarly; this further suggests that rather than being a product of law and culture, our notions of ownership might have a natural basis. And this may shed light on the nature of the regularities in how we think about and treat owned objects like our neighbor’s car and the girl’s teddy bear — we may view them as extensions of their owners’ bodies. 

Ori Friedman is an associate professor at the University of Waterloo, Canada. His research focuses on children’s and adults’ reasoning about ownership of property, pretense and fiction, and mental states. He can be contacted at friedman@uwaterloo.ca.