The presidential symposium at the APS 23rd Annual Convention began the way any good psychological study should: with a hypothesis. “Man is by nature a social animal,” said APS President and symposium chair Mahzarin Banaji, quoting Aristotle. In keeping with the form of good science, Banaji offered empirical support for her that hypothesis through the combined wisdom of the speakers she assembled, who provided a progression of evidence for human sociality found in evolutionary ancestors, babies, and adults alike.

“Twenty-three hundred years later, we have a science of all this,” said Banaji, of Harvard University. “The serious empirical study of social cognition has its earliest signs in the middle of the 20th century, but until now we hadn’t really taken a position on some of the most basic questions about ourselves as social animals.” 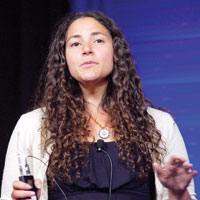 The “animals” part of the “social animals” hypothesis was handled by primate researcher Laurie Santos of Yale University, who gave what she called a whirlwind summary of how primate behavior is informing what we know about social cognition in humans.

“The goal would be to try to get insight into our social cognition, as an evolved primate, by studying our primate ancestors,” said Santos. “If we figure out what’s unique and what’s old, we can get some glimpses into the kind of experiences that might shape human cognition across the life course.”

Recently, Santos has found evidence in primates of the human tendency to place people into social categories. Typically, this placement is made with some form of judgment.For instance, people often have in-group biases — meaning they treat people in their own social group differently from outsiders. Research has also found that even when people are not explicitly aware of these biases, they harbor implicit prejudices.

To study such social behaviors in primates, Santos and her collaborators administered a series of tests to rhesus macaques that have divided naturally into social groups based on family lines. In one test, the researchers showed monkeys pictures of both in-group (familiar) and out-group (rival) faces and found the monkeys fixated on the rival faces twice as long. In another test, they found that monkeys also fixated on objects associated with the rival clan — “just like a Yankees cap becomes associated with a Yankees fan,” Santos said. 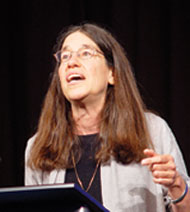 Modern social animals enter the world bursting with sociality, reported developmental psychological scientist Elizabeth Spelke of Harvard University. In their first year of life babies show a preference to learn from others (as opposed to on their own), and infants demonstrate a clear predisposition for helpfulness in social situations as well.

“Humans are prodigiously social, and our sociality begins very, very early in development,” said Spelke. “Infancy is a period of time in which a great deal of social experience and social cognitive development is going to be taking place.”

The key question, in Spelke’s view, is what makes infants so social. Some psychologists believe babies are “asocial blobs” who are simply great general-purpose learners, while others contend that infants use specific social capacities that developed through adaptive forces. Spelke offered a third possibility: Humans are endowed with a natural system for navigating the social world, a system upon which more advanced social skills develop.

In support of this idea, Spelke discussed the work of Katherine Kinzler, now at the University of Chicago, who has examined how infants select their social partners. This research shows that infants prefer to interact with someone who speaks their native language but that this preference does not extend to someone of their own race. Spelke suspects this behavior lingers from ancestral times, well before long-distance travel was common, when language was a more reliable cue of familiarity than race.

What infants appear to have, says Spelke, is “a system that seems to be attuned to information that was most reliable in our evolutionary past and that continues to be at work today.” 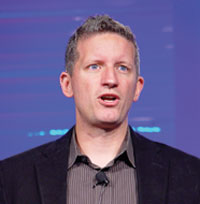 Spelke’s Harvard colleague Jason Mitchell examined human sociality in adults through the lens of neuroscience. Just as advances in genetics have forced biologists to adjust some ideas about the relationships between certain species, Mitchell argued, brain imaging is helping psychologists draw unexpected links between behaviors.

“By importing the methods from our neuroscience colleagues, one of the things psychological scientists have been able to do is to use new measures, new indices, of what mental operations actually share something in common and which, despite superficial similarity, might actually just be distant cousins,” Mitchell said.

Mitchell focused on two particular surprises that have emerged from this line of research. The first is the distinctiveness of social cognition. In one representative study, Mitchell and his collaborators scanned the brains of participants as they answered a series of questions, some of which were non-social in nature (Which is more likely to fetch a ball: cat or dog?) and others of which tapped social nerves (Who’s more likely to watch football: men or women?).

Although one might have guessed that this process of categorization would be handled by the same region of brain, Mitchell found that, in fact, a distinct pattern of brain activity occurred when participants responded to the social questions — a neural “signature of social cognition,” he called it. Mitchell has also discovered that these same areas are active when the brain is at rest, suggesting that our baseline cognition is to be prepared for social interactions.

“I think these observations are consistent with the idea that we also seem to have a brain that’s primed and ready, constantly on the lookout, for mental states in the world around us,” Mitchell said. APS Past President Susan Fiske of Princeton University  punctuated the symposium with a brief discussion about the flexibility of social cognition. Fiske summoned a more recent muse than Aristotle to describe social behavior — “One word: plasticity,” Fiske began, playing off a famous line in the movie The Graduate.

Fiske’s first example of plasticity as it relates to social cognition was the remarkable agility of human behavior. As soon as one psychological scientist discovers an automatic behavior, said Fiske, another demonstrates how social contexts can limit this instant response. She then noted that the study of social cognition itself is adapting to new ideas, borrowing approaches from social evolution and social neuroscience. A third flexibility, said Fiske, is the way shifting demographics — in particular the rise of immigration issues and income inequality, and the aging of baby boomers — will “provide the social context that will shape our science in the future.”

Even lectures about social cognition can be nimble, Fiske demonstrated. At one point she pivoted from her Friday evening talk, rather abruptly, to express a truly social realization: “I’m standing between you and drinks,” she said, referring to the reception immediately following the program.