Observer > 2013 > July/August > Multitasking in the Automobile

David L. Strayer has spent more than a decade studying the fundamental factors that impair drivers and lead to automobile accidents. Some distractions — like talking or texting on a smartphone — are already widely recognized as dangerous. But much of Strayer’s work focuses on cognitive distractions that occur even when people keep both hands on the steering wheel and their eyes on the road.

In June, Strayer made national headlines with a report on cognitive distractions behind the wheel. The report, published by the AAA Foundation for Traffic Safety, raises serious questions about speech-recognition technologies designed to facilitate “hands-free” talking, texting, and emailing from the driver’s seat.

The report was released shortly after Strayer delivered the APS-David Myers Distinguished Lecture on the Science and Craft of Teaching Psychology at the 25th APS Annual Convention. Audience members got a preview of a cutting-edge driver distraction scale published in his AAA report, as well as an overview of the implications of Strayer’s research for education and public policy.

Strayer told convention attendees that as an instructor he has discovered that simple, observational experiments are a powerful tool for teaching students about cognitive distraction. An exercise Strayer uses in his cognitive psychology class involves asking students to stand at intersections in residential areas to keep track of passing drivers’ stopping behavior and cellphone usage.

Classrooms around the country have participated in this experiment, and results are collected on the website of the University of Utah, where Strayer is a professor in the department of psychology. So far, a sample of approximately 57,000 observations shows that one in four drivers fails to make a legal stop, 10 percent of drivers talk on cell phones while driving, and the odds of failing to stop double when a driver is talking on a cell phone.

One aspect of Strayer’s research was especially newsworthy: The dangers of distracted driving aren’t resolved by hands-free devices or in-car technologies that help drivers stay connected without using their hands. Car manufacturers and third-party providers are rolling out software that enables consumers to make movie or dinner reservations, send and receive text or e-mail messages, post status updates on Facebook, and interact with navigation software — all through voice commands, Strayer and his colleagues wrote in the AAA report.

When Strayer’s team measured the effects of a speech-to-text interface email task on driving performance, they found that it causes a distraction level of 3.06 on a 5-point scale, where 1.0 represents the performance of relatively unimpaired drivers and 5.0 represents the performance of drivers completing the highly demanding Operation Span (OSPAN) math and verbal task. (OSPAN, developed in 1989 by Turner & Engle, requires participants to simultaneously perform a math and memorization task.) To Strayer’s team, the speech-to-text task appeared to be more distracting with hand-held (2.45) and hands-free (2.27) cellphone conversations — both of which are associated with increased crash rates. 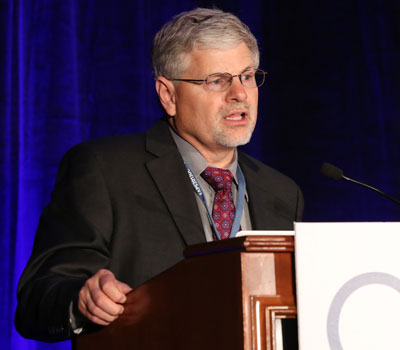 One question guiding Strayer’s research is why certain cognitive distractions affect drivers so dramatically while others — such as listening to the radio or audiobooks — do not. Strayer has proposed that the mental challenge of participating in a conversation or using an electronic voice-to-text interface can lead to inattentional blindness — the phenomenon that occurs when people who are engaged in a cognitively demanding task fail to notice objects that don’t seem to be related to that task; this is so even when those objects are particularly novel. In their popular 2010 book The Invisible Gorilla, Christopher Chabris and Daniel Simons describe a classic example in which volunteers were tasked with counting the number of times that a group of basketball players passed a ball to each other. The volunteers became so absorbed in the task that they failed to notice when a person wearing a gorilla suit walked across the court.

To test whether inattentional blindness affects distracted drivers, Strayer and a University of Utah colleague, Frank A. Drews, asked study participants to complete a driving simulation task; some of the participants also engaged in a conversation on a hands-free cellphone. The duo used a mobile eye tracker to identify exactly where the participants were looking while they were driving. Participants were then shown a series of objects and asked whether they had seen those objects while they were driving. The results — which have since been replicated — showed that the drivers who were not distracted performed better on the memory test by a margin of two to one, compared to those talking on the hands-free device.

Right now, there aren’t any federal safety guidelines that address how drivers should deal with these hands-free cognitive distractions; however, Strayer’s research provides evidence that such guidelines are needed.

Sue Frantz, Highline Community College, who introduced Strayer at the convention and serves on the steering committee for the APS Fund for Teaching and Public Understanding of Psychological Science, hopes that incorporating Strayer’s work into the psychology curriculum can make roads safer.

Observer > 2013 > July/August > Multitasking in the Automobile