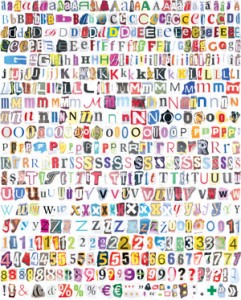 Thanks to toys containing magnetic colored letters, psychological scientists Nathan Witthoft and Jonathan Winawer of Stanford University have made some interesting discoveries about the role of learning and memory in synesthesia.

The participants reported letter-color matches that were consistent within and between testing sessions, even after a delay of up to seven years since their first session. They also performed a timed task in which they were presented with colored letters for one second each and were required to indicate whether the color was consistent with their synesthetic association. They were able to perform the task rapidly and accurately. Based on the fact that the participants’ letter-color associations were specific, automatic, and relatively constant over time, they met the criteria for true synesthesia.

The degree of similarity in the letter-color pairings across participants, along with the regular repeating pattern in the colors found in each individual’s letter-color pairings, indicates that the pairings were learned from magnetic colored letters that the participants had been exposed to in childhood. According to the researchers, these are the first and only data to show learned synesthesia of this kind in more than a single individual.

The scientists point out that this does not mean that exposure to the colored letter magnets was sufficient to induce synesthesia in the participants, though it may have increased the chances. After all, many people who do not have synesthesia played with the same colored letter magnets as kids. Based on their findings, Witthoft and Winawer conclude that a complete explanation of synesthesia must incorporate a central role for learning and memory.