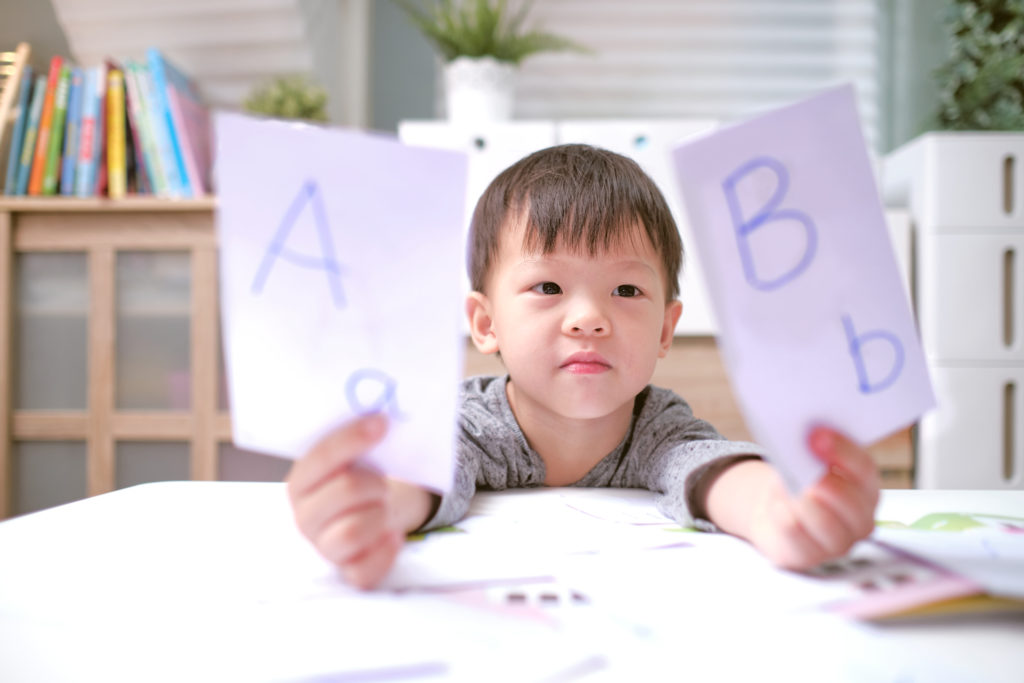 How do children learn language, and how is language related to other cognitive and social skills? For decades, the specialized field of developmental psycholinguistics has studied how children acquire language—or multiple languages—taking into account biological, neurological, and social factors that influence linguistic developments and, in turn, can play a role in how children learn and socialize. Here’s a look at recent research (2020–2021) on language development published in Psychological Science.

One of the first challenges faced by infants during language acquisition is identifying word boundaries in continuous speech. This neurological research suggests that even preverbal infants can learn statistical patterns in language, indicating that they may have the ability to segment words within continuous speech.

Using electroencephalogram measures to track infants’ ability to segment words, Choi and colleagues found that 6-month-olds’ neural processing increasingly synchronized with the newly learned words embedded in speech over the learning period in one session in the laboratory. Specifically, patterns of electrical activity in their brains increasingly aligned with sensory regularities associated with word boundaries. This synchronization was comparable to that seen among adults and predicted future ability to discriminate words.

These findings indicate that infants and adults may follow similar learning trajectories when tracking probabilities in speech, with both groups showing a logarithmic (rather than linear) increase in the synchronization of neural processing with frequent words. Moreover, speech segmentation appears to use neural mechanisms that emerge early in life and are maintained throughout adulthood.

Children can acquire language rapidly, possibly because their caregivers use language in ways that support such development. Specifically, caregivers’ language is often fine-tuned to children’s current linguistic knowledge and vocabulary, providing an optimal level of complexity to support language learning. In their new research, Leung and colleagues add to the body of knowledge involving how caregivers foster children’s language acquisition.

The researchers asked individual parents to play a game with their child (age 2–2.5 years) in which they guided their child to select a target animal from a set. Without prompting, the parents provided more informative references for animals they thought their children did not know. For example, if a parent thought their child did not know the word “leopard,” they might use adjectives (“the spotted, yellow leopard”) or comparisons (“the one like a cat”). This indicates that parents adjust their references to account for their children’s language knowledge and vocabulary—not in a simplifying way but in a way that could increase the children’s vocabulary. Parents also appeared to learn about their children’s knowledge throughout the game and to adjust their references accordingly.

This research tracked real-time brain activation during infant–adult interactions, providing an innovative measure of social interaction at an early age. When communicating with infants, adults appear to be sensitive to subtle cues that can modify their brain responses and behaviors to improve alignment with, and maximize information transfer to, the infants.

Piazza and colleagues used functional near-infrared spectroscopy—a noninvasive measure of blood oxygenation resulting from neural activity that is minimally affected by movements and thus allows participants to freely interact and move—to measure the brain activation of infants (9–15 months old) and adults while they communicated and played with each other. An adult experimenter either engaged directly with an infant by playing with toys, singing nursery rhymes, and reading a story or performed those same tasks while turned away from the child and toward another adult in the room.

Results indicated that when the adult interacted with the child (but not with the other adult), the activations of many prefrontal cortex (PFC) channels and some parietal channels were intercorrelated, indicating neural coupling of the adult’s and child’s brains. Both infant and adult PFC activation preceded moments of mutual gaze and increased before the infant smiled, with the infant’s PFC response preceding the adult’s. Infant PFC activity also preceded an increase in the pitch variability of the adult’s speech, although no changes occurred in the adult’s PFC, indicating that the adult’s speech influenced the infant but probably did not influence neural coupling between the child and the adult.

Language and communication are important for social and cognitive development. Although deaf and hard-of-hearing (DHH) children born to deaf parents can communicate with their caregivers using sign language, most DHH children are born to hearing parents who do not have experience with sign language. These children may have difficulty with early communication and experience developmental delays. For instance, the development of theory of mind—the understanding of others’ mental states—is usually delayed in DHH children born to hearing parents.

Yu and colleagues studied how providing DHH children with hearing devices early in life (before 2 years of age) might enrich their early communication experiences and benefit their language development, supporting the typical development of other capabilities—in particular, theory of mind. The researchers show that 3- to 6-year-old DHH children who began using cochlear implants or hearing aids earlier had more advanced language abilities, leading to better theory-of-mind growth, than children who started using hearing provisions later. These findings highlight the relationships among hearing, language, and theory of mind.

Lowe and colleagues synthesized data from studies that compared the performance of monolingual and bilingual participants between the ages of 3 and 17 years in executive-functioning domains (1,194 effect sizes). They found only a small effect of bilingualism on participants’ executive functioning, which was largely explained by factors such as publication bias. After accounting for these factors, bilingualism had no distinguishable effect. The results of this large meta-analysis thus suggest that bilingual and monolingual children tend to perform at the same level in executive-functioning tasks. Bilingualism does not appear to boost performance in executive functions that serve learning, thinking, reasoning, or problem solving.