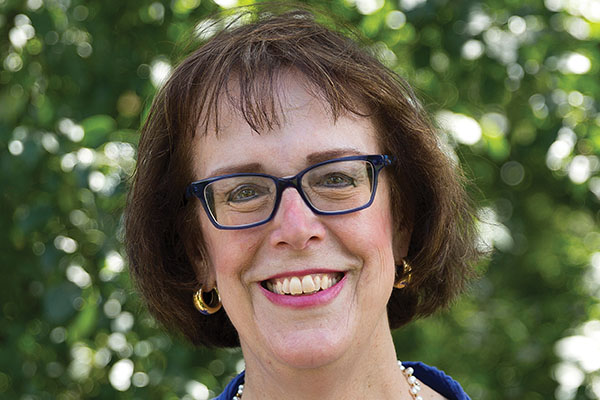 Growing up, one of APS James McKeen Cattell Fellow Janet Shibley Hyde’s favorite activities in school was Around the World, a math game in which students compete to “travel” around their classmates by answering as many problems as possible without making a mistake.

“Nobody told me I was a girl and I wasn’t supposed to be competitive,” Hyde, a professor of psychology and women’s studies at the University of Wisconsin-Madison, said during her Award Address at the 2018 APS Annual Convention in San Francisco. “I just loved the competition, what can I say?”

Even today, the kind of benevolent, and sometimes not so well-meaning, sexism epitomized by John Gray’s 1992 book “Men Are from Mars, Women Are from Venus” remains popular in mass media portrayals of gender. People think they’re being kind when they say women are hardwired by hormones or other “immutable” biological factors to be nurturing and caring, or possess a “nearly psychic” ability to perceive emotions. But none of that corresponds to the data, Hyde explained.

“Unfortunately, it’s all wrong,” she said. “As I’m fond of saying, you’ll never hear a good neuroscientist use the term ‘hardwired’ because the brain is anything but hardwired — it is plastic, so anyone who is trying to sell you on [that notion], you know you have to be suspicious of.”

Hyde’s meta-analyses of the current body of research on gender difference cast aside both the difference and deficit models — the idea that women just aren’t quite as capable as men overall — in support of what she has titled the gender similarities hypothesis: the theory that “men and women are very similar on most (not all) psychological variables.”

Hyde’s approach to psychological science revolves around quantitative literature reviews, a method of combining the results of numerous studies on a given topic to identify not only whether an effect exists, but how large it is.

Meta-analysis is the “gold standard” for conclusions in medicine, education, and psychological science, Hyde said, and, in the case of gender differences, comes down to computing a weighted average, d, that estimates the standardized difference between male and female scores across a set of studies.

Typically, researchers examining gender differences calculate this number so that it has a positive score if males score higher on a particular measure and a negative score if females score higher. According to psychological scientist Jacob Cohen’s guidelines for interpreting effect sizes, the number can be small (0.2), medium (0.5), or large (0.8) — or, Hyde added, completely trivial (less than 0.1), indicating an almost complete overlap in scores. For example, data indicate that the effect size of the height difference between men and women is about 2.0. This suggests a noticeable and meaningful difference between males and females, but even then, taller-than-average women can still stand head and shoulders above shorter-than-average men. A d of 0.15, on the other hand, would suggest an almost complete overlap in the distributions of scores for males and for females.

One limitation of reviewing research on gender difference, Hyde noted, is that the bulk of studies available for review are based primarily on the gender binary — a social construct facing increasing academic and cultural criticism. As such, the focus tends to be on cisgender men and women to the exclusion of both transgender and non-binary individuals. Hyde’s recent paper, “The future of sex and gender in psychology: Five challenges to the gender binary,” further elaborates on the empirical evidence for a more diverse range of gender experiences.

Running the Numbers on Women in Mathematics

In 2005, former President of Harvard University Lawrence Summers made a lengthy statement to the United States’ National Bureau of Economic Research outlining his belief that women simply don’t have the math ability to compete with men for jobs in science and engineering.

“His speech annoyed me, but I fight not with my fists, but with data, so I went to NSF and got a grant to test whether Larry Summers was right,” Hyde said.

To start, a quick glance at the National Science Foundation’s website nipped the myth that women simply aren’t interested in math in the bud: 47% of undergraduate degrees in mathematics were awarded to women in 2002.

“If women can’t do math, I don’t see how they’re getting half the undergraduate degrees in math, despite what Larry Summers says, so this is our first clue that things are not quite what the stereotypes say,” Hyde quipped.

Next, she held the question of women and girl’s performance in mathematics up to meta-analytic scrutiny using the annual state assessment scores mandated by No Child Left Behind policies in the United States. Just 10 states responded to Hyde’s request for data sorted by gender, grade level, and ethnicity, but even that was enough to provide information on more than 7 million kids.

“I don’t know what could be more ‘no gender difference’ than that,” Hyde said.

A previous meta-analysis Hyde had conducted in the 1990s found evidence of a gender performance gap in math, but these new data showed that female students had clearly reached parity with their male peers. Another 1990 study by Max Lummis and Harold W. Stevenson found that boys performed better on word problems than girls in all cultures — but that wasn’t the real takeaway. Lummis and Stevenson also found that American students were outperformed substantially by their peers of both genders in other countries.

In fact, a 2008 study by APS Fellow Edward C. Melhuish et al. found that the best predictor of a child’s mathematical ability wasn’t gender, but their mother’s education level, a possible proxy for social class, Hyde said. Other strong predictors included their home learning environment, elementary school quality, and their family’s socioeconomic status, all factors that influence children’s educational outcomes regardless of gender.

Assertions that boys and girls learn differently due to girls’ inherent ability to cooperate and sit still for extended periods of time or higher rates of Attention Deficit/Hyperactivity Disorder (ADHD) in boys simply aren’t supported by the data, Hyde continued, but that hasn’t stopped so-called education “gurus” from promoting single-sex classrooms. In a 2014 meta-analysis of well-controlled studies with random assignment, Erin Pahlke of Whitman College, Hyde, and colleagues found no performance differences in math and other domains between single-sex and co-ed classrooms.

“What you want is a mixing,” Hyde said. “Getting them to work together and minimizing, rather than emphasizing, differences between boys and girls.”

Encouraging existing mathematical talent is important not only on the individual level, where it grants access to prestigious, high-paying jobs, Hyde explained, but on the national level.

“We can’t afford to waste 50% of our talent in the US,” she said. “We’re no longer a manufacturing society. The thing that’s going to save us in the global economic competition is our scientific and technological innovation.”

The Data on Depression

Gender stereotypes aren’t harmful only to women, of course — the depiction of depression as a “female problem” can lead clinicians to overlook boys who are struggling with the condition as well.

Rates of depression in boys and girls were thought to diverge around ages 13 to 15 years old, when rates in girls jump dramatically. But studies on the topic of gender and depression had never been subject to meta-analysis until Hyde and her team took on the challenge in 2017 — possibly because there were over 56,000 studies to wade through on the topic.

Hyde and colleagues narrowed down their search by excluding studies based on convenient samples of college students, focusing instead on representative samples drawing on populations from over 90 countries worldwide. They then split the analysis into two parts: one drawing on diagnostic measure datasets from 66 articles with 1.7 million participants, and the other drawing from 97 articles featuring over 1.9 million participants’ self-reported symptoms of depression.

The diagnosis-based meta-analysis confirmed much of the current thinking on gender and depression. Rather than computing a weighted average, Hyde used a female-to-male odds ratio (OR) to find that, averaged over all ages and nationalities included in the study, roughly 1.95 females per male met the diagnostic criteria for depression — just slightly under the commonly cited 2.0 OR.

Beyond that, there were some surprising findings, Hyde said. To begin with, the OR at age 12 was found to be 2.37, suggesting that gender differences in depression diagnoses may arise even earlier than previously believed.

Furthermore, the OR was highest — at nearly 3.0 — among 13- to 15-year-olds. From there, the OR declined across age groups, reaching the overall average of 2.0 for participants in their 20s, and remaining stable thereafter, a previously unidentified trend in adulthood, Hyde continued.

These findings have significant clinical, methodological, and theoretical implications, Hyde said. An OR of 2.0 suggests that the majority of people with depression are female, but that still means 1/3 of depressed adults are men. Yet the perception of depression as a somehow “feminine” condition can make men reluctant to seek help. The prevalence of studies on depression with single-sex designs that exclude male participants exacerbates these stereotypes, preventing progress on the question of how depression manifests in boys and men, she added.

Theoretically, Hyde continued, conceptualizations of how depression may emerge as a reaction to factors such as pubertal hormones, stress, and sexual harassment victimization in adolescence need to account for the narrowing of the gender gap in the 20s.

The researchers also identified an important moderating factor: gender empowerment. In countries that the United Nations Development Programme rated as having higher gender empowerment — a measure that factors in the ratio of women to men holding parliamentary seats, average estimated income, and the percentage of women working in high-level positions such as senior management, public office, and academic jobs — the behavioral differences between men and women were smaller.

Hyde notes that they did not observe this trend for every behavior they examined, but the overall effect aligns with the social role theory, which posits that men and women behave differently in large part due to societal expectations.

In 2005, when Hyde first put forward the gender similarities hypothesis, the data created a clear pattern in support of her claim: of 124 effect sizes from 46 existing meta-analyses, 78% reported d values that were small or close to zero. The “meta-meta-analysis,” independently replicated in 2015, found evidence of some gender differences, but not nearly enough to suggest that men and women come from different psychological worlds — and studies of very young children suggest that the differences that do exist may take years of socialization to develop.

“What we need to do is think more systematically about where the messages are coming from that create those early differences,” Hyde said. “I don’t for a minute believe they’re hardwired into the brain.”

I thought that Summers’ point was that although male and female average math scores were much the same, the males showed greater variance. Hence more men at the top and bottom of the scale and thus more men in high-end math discipline. Does Prof. Shibley’s work address this point?

Gender Bias Sways How We Perceive Competence in Faces

Faces that are seen as competent are also perceived as more masculine, research reveals. More