Observer > 2017 > May/June > Humans Are Animals, Too: A Whirlwind Tour of Cognitive Biology 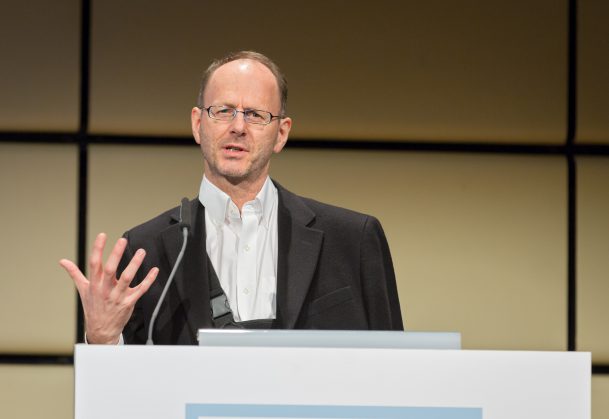 For a very long time, there have been two main camps on animal behavior and animal cognition: exclusivists, who focus on the differences between animals and humans, and inclusivists, who concentrate on similarities between humans and the rest of the animal kingdom. This long-running debate goes back millennia, with philosophers like Aristotle and Descartes arguing that humans are the only animals capable of higher-order cognition such as rational thought and language, and equally distinguished thinkers such as Voltaire, Charles Darwin, and David Hume arguing that it is self-evident “that beasts are endow’d with thought and reason as well as man.”

“The core message I want to get across to you today is that in a sense, both of these sides are correct,” Fitch emphasized during his keynote speech at the 2017 International Convention of Psychological Science in Vienna. “And from a modern biological point of view, we really need to turn these ideas on their head and recognize a very simple biological fact: It’s a truism, but people are animals, too.”

A Biology of Shared Fundamentals

The basis of humans’ biology contains an immense amount of shared fundamentals: Every living thing from bacteria to daffodils shares our basic genetic code, and our nervous system structure is shared with lower-order animals such as flies and worms as well as closer relatives such as bonobos. But of course every species is unique.

Along with this highly comparative approach, cognitive biologists break down complex traits, such as language or music, into multiple basic components, some of which may be shared among humans and other animals, and some which may be unique to a particular species. Cognitive biologists call this the “divide and conquer” or multicomponent approach, Fitch explained. Based on the presence or absence of these components, we can map a phylogenetic tree that allows researchers to rebuild the evolutionary past of particular cognitive abilities.

Humans share many traits with our nearest relatives, the great apes. We share large brains, large body size, long lives, and prolonged childhoods because our common ancestor, which was not a chimp or a gorilla or a human, also had those characteristics. This evolutionary process is called homology: Different species share a set of common traits because they were inherited from a common ancestor. The beauty of homology, Fitch said, is that we can use it to rebuild the past by looking at living species.

In contrast is the process of convergent evolution, in which different species independently adapt similar features. For example, humans and birds are both bipedal, but not because we shared a common two-legged ancestor. Humans and birds adapted to walking on two legs for different reasons at different points in time.

Fitch also pointed out that evolution is often circuitous rather than linear, with adaptations arising and disappearing multiple times across a single given species. For example, most humans and some other primates are trichromats — we possess color vision thanks to three different types of cone cells in our eyes. Most other mammals, on the other hand, are dichromats lacking color vision. If we examined only mammals, it would appear that trichromacy is a highly advanced adaptation that humans share with only a few other highly evolved species. But broadening the comparative net beyond mammals shows that birds not only have trichromacy, but actually possess four different cones — tetrachromacy, he explained.

Fish, reptiles, and amphibians also have tetrachromacy, suggesting that that the common ancestor of all living vertebrates was in fact tetrachromatic, and that over time mammals lost the adaptation of color vision. Somewhere along the way, primates — at least some of us — regained back a sort of partial color vision, Fitch said.

Tool use is another adaptation that has evolved multiple times in different clades of animals. Chimps, our nearest living relatives, use tools to fish for termites and crack open nuts. Six million years ago, our common ancestor with chimps also probably used simple tools to perform similar tasks. Through homology, we can imagine the cognitive capabilities of our extinct ancestors.

But primates aren’t the only animals capable of tool use. New Caledonian crows use sharp straight objects in their environment to dig hard-to-reach grubs out of tree trunks. Researchers at the University of Oxford have found that in the lab, these crows will make their own tools by bending pieces of wire into hooked shapes for scooping food out of containers.

“These are very smart animals, and they do have the capacity to solve tasks and to go beyond whatever their biological predispositions are in the same way that we can as humans. That’s how we can drive cars and make power drills,” Fitch said.

Of course, Fitch added, our common ancestor with crows was not likely a tool user, but this analogous adaptation allows us to start asking important questions: Why does tool use evolve? And why has it evolved all these different times, and in all these different ways, across such distinct organisms?

Along with tool use, humans share many cognitive abilities with other species, including the formation of memories, categories, basic emotions such as anger, planning and goal-setting, and rule learning. These kinds of basic nonverbal concepts likely predicated language by many millions of years of evolution. Unlike tool use, language appears to be a trait that only humans possess. However, most of the component parts of language are shared with other species, Fitch said.

Although some chimps and bonobos have learned to sign or communicate with a keyboard, none have ever learned to say “hello” or to sing “Happy Birthday.” This is not because chimps aren’t smart or aren’t able to imitate, but because they have a very limited ability to control their vocalizations and mimic sounds from their environments.

One long-running hypothesis for primates’ inability to speak is that they (and other animals) lack the descended larynx that humans possess. Most of the information about animal larynxes, however, has come from dissections of dead animals. As a postdoc, Fitch became interested in the way that living animals communicate. So far, all of the mammals he’s examined lower their larynx to a human-like position while making loud vocalizations; when a dog barks, the larynx retracts down just for the moment of the bark and then it pops back up.

“What’s unusual about us is not that we have a descended larynx, just that it’s down all the time,” Fitch explained.

This research suggests it’s not the vocal anatomy that is crucial for language, but rather something in the brain. One long-standing hypothesis is that most mammals have only indirect connections from their motor cortex to the neurons that control the vocal tract, larynx, and tongue. Humans, too, have those neural connections, but also have direct connections from the motor cortex to motor neurons that control the larynx. This is the key that gives humans the control over our vocal tracts that chimps lack.

However, humans aren’t the only animals capable of learning complex vocalizations; vocal learning has independently evolved in bats, elephants, seals, cetaceans, and several different clades of birds. By studying the neural correlates of vocal learning in a broad variety of species, researchers can test for this direct-neural-connections hypothesis. So far, studies have examined two clades of birds — song birds and parrots — and in both cases, the hypothesis held up. Birds with vocal-learning abilities have these direct connections, while birds that aren’t vocal learners, such as doves or chickens, do not.

“My general conclusion here is that by taking a very broad comparative perspective on a wide range of different species, this really gives us a powerful tool to both develop hypotheses and also to test those hypotheses,” Fitch explained. “We can test both mechanistic and functional evolutionary hypotheses.”

Syntax: The Heart of Language

Delving deeper into the subject of communication, Fitch said that syntax, the set of rules that determines the meaning of a sentence, is really at the heart of language. Beyond the spoken word, humans are able to use language in many forms: sign language and writing, for example, are possible because of our ability to use advanced syntax. Apes may not be able to talk, but they can learn and express hundreds of words through signs or keyboards. Despite mastering a large vocabulary, however, the level of syntax they obtain is approximately that of a 2-year-old child — basically, they have the ability to put two words together. Although it’s a very limited level of syntax, it’s still syntax, so there is something there in common with human language.

Humans don’t interpret language as just a string of words in a sequence; crucially, we are able to interpret these sequences as having a higher-order hierarchical structure. Fitch and colleagues are trying to determine which language components different organisms possess by examining their ability to learn simple grammar structures versus more complex ones.

So far, comparative experiments have shown that this ability to use hierarchical syntax may be unique to humans. In one series of experiments, researchers attempted to teach hierarchical grammar to two different species of birds: pigeons and keas. Keas are a type of parrot native to New Zealand, and they’re known for being extremely clever. Rather than using recordings of speech, the researchers trained the birds to recognize different visual patterns of abstract shapes. Even the pigeons — not the smartest birds — were able to master the simple sequential patterns, but although they underwent weeks of intensive training, both groups of birds failed to learn the more complex grammar.

“So where this leaves us right now is: lots of different species have been shown to do very finite-state grammars [and] simpler sequential grammars, but right now, the only good evidence of going beyond that to the hierarchical grammar is for human beings,” Fitch said.

What exactly allows humans to take this linguistic leap? Fitch suspects that humans have developed a cognitive proclivity for inferring tree-like structures from sequences that are difficult or impossible for other animals. According to his dendrophilia hypothesis, humans’ unique aptitude with syntax comes from automatically interpreting sequences into branching hierarchical chunks. To get to this next level of grammar, humans may have evolved an additional form of abstract memory that allows us to keep track of phrases even after they’re over, Fitch suggested. To enable this new adaptation, human brains may have beefed up the requisite neutral structures for processing language. Fitch pointed out that Broca’s area is seven times larger in humans relative to chimps, making it the most expanded area of the human brain compared with chimps that we know about. In addition, it is far more interconnected to other brain structures in humans than in other primates.

“For me, the most exciting possibility is again in syntax,” Fitch concluded. “We share a lot, but a relatively small difference in terms of brain architecture made a big difference in cognitive ability.”

Observer > 2017 > May/June > Humans Are Animals, Too: A Whirlwind Tour of Cognitive Biology