Observer > 2014 > February > Genetically Ever After 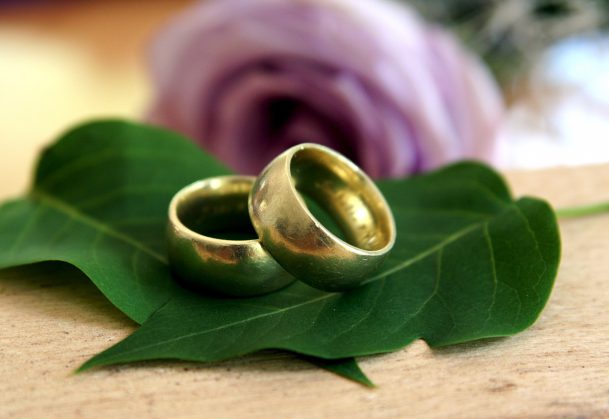 Centuries ago, love was considered an inane reason for marrying in most Western societies. Women were encouraged, if not forced, to consider a suitor’s wealth and standing far ahead of his personal qualities.  And husbands treated their wives as property, finding passion and romance in adultery rather than in matrimony.

Today, love and marriage are so intertwined that we generally accept them as civil rights — more than half of Americans, after all, believe the legal right to wed should be extended to lesbian and gay couples, according to a recent Gallup poll. People are delaying marriage more than they did in any other generation — in part to establish careers but mostly to make sure they find their ideal mate.

Indeed, marriage can deliver one of the highest forms of emotional security. Yet it can also incite turmoil. For every couple enjoying a romantic Valentine’s Day dinner, many others are suffering in benumbed or bellicose wedlock.

Psychological scientists have long explored the factors that make or break marriages. But until recent decades, that research stayed generally in the realm of social psychology. As science increasingly blends multiple disciplines and specialties, researchers in the fields of behavioral genetics, biostatistics, neuroscience, and others are finding that marital success may hinge to a significant degree on, of all things, biological factors.

Scientists have consistently turned to twin registries that universities and government bodies around the world maintain for research purposes. Many use the twin pairs registered in these databases to conduct longitudinal studies, interviewing the siblings at various points throughout their lives to track changes in marital status, health, and other identifiers. This has helped behavioral geneticists and other researchers parse out heritable influences from environmental factors when studying marital satisfaction. Having started with a view of the level of genetic similarity between the twin siblings, researchers can distinguish environmental factors that the siblings share during their lives from those they don’t share.

In the study of marriage, these datasets have allowed researchers to explore an intriguing question: If one twin enjoys a happy, loving marriage, what are the chances that the other will enjoy the same level of contentment?

One of the first significant discoveries linking genes to marital health emerged in the early 1990s, when two University of Minnesota psychological researchers published a study on the divorce status of more than 1,500 sets of same-sex twins. APS Fellows Matt McGue and the late David Lykken found that identical twin siblings, who share the same DNA, were more likely to both be divorced than were same-sex fraternal twins, who share only about half of the same genes.

Several years later, Vassar College psychology professor Susan Trumbetta and APS James McKeen Cattell Fellow Irving Gottesman, University of Minnesota, examined endophenotypes for marital status by analyzing data from a US military registry of twin brothers who served in World War II or the Korean conflict. Their analysis indicated a hereditary propensity toward a stable marriage, and more environmental factors playing into a propensity to wed more than once. In 2010, Beth Jerskey, then a graduate student at Boston University and now a Brown University neuropsychologist, led a study of twins who served in the Vietnam War and found that both getting married and getting divorced are significantly influenced by genetic factors. However, the genetic and environmental influences responsible for getting married are different from those that influence divorce, the study showed.

Scientists also examined the role that genes, by way of their influence on personality, play in a person’s likelihood of marrying at all. Results from those studies have varied, with the researchers attributing those discrepancies in part to demographic differences. Trumbetta and Gottesman, along with Ezra Markowitz, formerly a student at Vassar and now a postdoctoral fellow at Columbia University, analyzed data from the World War II era cohort and found the heritability of marriage propensity changes over the life course, peaking at stages of family formation and offspring development. A subsequent University of Minnesota study of adult twins — all younger than the World War II cohort — showed identical twin siblings were more likely to both have married than were fraternal twins.

But what about those who do marry? How do they feel about their unions? And how much do genes factor into their sentiments toward their spouses?

One of the leading psychologists studying these questions is Erica Spotts, formerly of Karolinska Institutet in Sweden and now health scientist administrator at the US National Institutes of Health’s Office of Behavioral and Social Sciences Research. In her work, Spotts has found gender differences in the role that genetics play in marital satisfaction.

Spotts led a study of adult Swedish women and their male partners to assess not only the genetic and environmental influences on each person’s reports on marital quality, but also how much the women’s genes and life experiences affected their male partners’ perceptions of the relationship. Her findings have predominantly attributed marital satisfaction to environmental factors.

In one study, Spotts and her colleagues culled participants from a database of hundreds of adult Swedish twin sisters, their male partners, and one of their children. All participants were given a questionnaire to assess various aspects of personality, mental health, and family relationships. In analyzing the results, Spotts and her team found that it was nongenetic factors that overwhelmingly affected perceived marital quality, both among the twin sisters and between those women and their husbands.

The most recent studies by behavioral geneticists have focused on identifying specific gene variants that affect bonding behavior. In a study published in 2008, for example, an international multidisciplinary team of researchers, including Spotts and other psychological scientists, identified a genetic variant, or allele, in men that appears to affect the health of their marriages. An individual can inherit this variant, called allele 334, from either or both parents.

Hasse Walum, a behavioral geneticist at Karolinska Institutet, was inspired to launch the investigation based on a 2005 study on prairie voles. This rodent, unlike its cousin the meadow vole, mates for life. Emory University researchers had identified a gene in the male prairie voles that explained their monogamy. This particular gene, AVPR1A, controls the brain chemical vasopressin, which plays a role in regulating emotional interactions — especially in men.

To see if this same gene played any role in determining men’s bonding behavior, Walum and his team analyzed DNA samples and questionnaire responses from 552 heterosexual twin brothers in Sweden. They found that men who carried a variant of the gene called allele 334 were more likely than noncarriers to have experienced a marital crisis or threat of divorce in the prior year. In fact, men who carried two copies of the allele were more than twice as likely as noncarriers to report marital difficulties. And carriers were also more likely to be involved in a relationship without being married.

The investigators then examined whether the genotype of the men has any connection to their spouses’ perceptions on the marriages. Based again on questionnaire results, women married to men with one or two 334 alleles scored significantly lower on marital satisfaction than did women married to men without the allele. These women described their partners as less physically affectionate and more disagreeable.

Allele 334 isn’t the only variant found to sway marital harmony. In 2013, a research team headed by APS Past President Robert W. Levenson, University of California, Berkeley, reported a link between relationship fulfillment and a gene variant known as 5-HTTLPR, found on the serotonin transporter gene. All humans inherit a copy of this gene from each parent.

The 5-HTTLPR allele comes in two major variants — short and long. The research showed that people who inherited two short alleles had a heightened emotional sensitivity to the ups and downs of a long-term relationship.

The data come from a study, led by Levenson, that has tracked more than 150 married couples for more than 2 decades. Every 5 years, the couples participating in the study have come to UC Berkeley to report on their marital satisfaction and interact with one another in a lab setting while researchers code their conversations based on facial expressions, body language, tone of voice, and topic of discussion.

In a recent phase of the research, more than 100 of the study participants provided DNA samples, and researchers matched their genotypes with their levels of marital satisfaction and the emotional tenor of their interactions.

The results showed that individuals with two short 5-HTTLPR alleles were found to be most unhappy in their marriages when there was a lot of negative emotion, such as anger and contempt, and most happy when there was a lot of positive emotion, such as humor and affection. By contrast, those with one or two long alleles were far less bothered by the emotional tenor of their marriages.

The new findings don’t mean that couples with different variations of 5-HTTLPR are incompatible, the researchers note. Instead, it suggests that those with two short alleles are likelier to thrive in a good relationship and suffer in a bad one.

“Individuals with two short alleles of the gene variant may be like hothouse flowers, blossoming in a marriage when the emotional climate is good and withering when it is bad,” said Claudia M. Haase, assistant professor of human development and social policy at Northwestern University and lead author of the study, which she conducted as a postdoctoral fellow at UC Berkeley. “Conversely, people with one or two long alleles are less sensitive to the emotional climate.”

Psychological researchers argue that the studies linking genetic factors to marital happiness need to be widened to more diverse samples, cautioning that results could differ across races, cultures, generations, and even same-sex partnerships versus heterosexual unions.

And Spotts and her colleagues have pointed out that, just as with propensity toward certain diseases, genetic effects are open to environmental manipulation. A person with an apparent genetic propensity toward marital strife can still find matrimonial contentment with the right partner and the right conditions.

Indeed, couples entering marriage today arguably have more power and enlightenment to make those right choices. Women have become more financially independent and in many marriages are the primary earners. Men are more willing to share household duties and childrearing responsibilities. And because they’re marrying later in life, both men and women are likely to bring more emotional maturity and realistic expectations into the relationship.

This could mean our understanding of the impact that genetic and environmental combinations have on marriages will become even more blurred. But it could also better reveal the social conditions that counter one’s heritable risks for breaks in the ties that bind. 

Observer > 2014 > February > Genetically Ever After

Scott Sleek is APS’s director of news. He can be contacted at ssleek@psychologiscalscience.org.