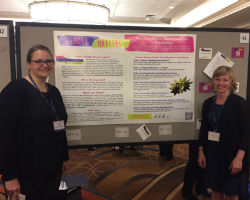 Alexandra Rutherford (right) and Jacy Young are involved in a project, supported by an APS grant program, aimed at achieving gender equality in STEM fields.

Over the past 10 years, the question of why women continue to be underrepresented in science, technology, engineering, and math (STEM) fields has received sustained attention from researchers, educators, policy-makers, and the general public. Psychological scientists have been at the forefront of research to determine the causes of this underrepresentation, proposing and evaluating multiple possibilities ranging from outright sex discrimination (Moss-Racusin et al., 2012) to lifestyle choices and career preferences (Ceci & Williams, 2011) and the influence of gender roles on women’s educational and occupational decisions (Eccles, 1994). One of the effects of the increased focus on gender in science is the renewed realization that gender matters at all stages of scientific inquiry, from setting research priorities to formulating research questions to interpreting data and applying findings.

In this project, funded by the APS Teaching and Public Understanding of Psychological Science grants program, we developed a series of videos to explain to students how critical attention to sex and gender helps create more effective science. In developing these teaching videos, we drew on the conceptual framework of the Gendered Innovations project originally developed at Stanford University. This framework identifies three strategies for achieving gender equality in STEM:

Our project engages with this third strategic approach — gender analysis.
Gender-based analysis, or GBA, is a set of tools to help researchers critically assess how gender norms and assumptions enter and impact the research process. GBA also allows us to consider the impact of research findings on diverse gender groups and the intersections of gender with other identity factors such as race/ethnicity, class, and sexual orientation. The federal government of Canada committed to using gender-based analysis to assess the differential impacts of policies, programs, services, and other initiatives on diverse gender groups in 1995, but only recently is it being used more systematically. In 2015, the World Health Organization identified a continuum of approaches for integrating sex and gender into health research, and as of 2016, the National Institutes of Health has asked grant applicants to elaborate on how they plan to factor consideration of sex as a biological variable into research design and analysis. There have been similar developments in many European granting agencies.

Although GBA is increasingly prominent in STEM (see Schiebinger et al., 2011–2017; Sharman & Johnson, 2012), it has not been as thoroughly applied to psychology and is not generally taught to undergraduates. Feminist psychologists have for many decades called attention to the ways that gender biases operate in psychological research, making it potentially less relevant for all genders and even perpetuating harmful stereotypes about gender and race (e.g., Grady, 1981; Sherif, 1979). Insights from GBA can help avoid these pitfalls and create more socially useful and transformative research and policy, not only about gender but in all areas of psychological science. Psychology students are well-positioned to integrate gender analysis into their own studies and in so doing produce more gender-equitable science. We just have to teach them how to do it.

To address this need, we conceptualized and developed a series of seven short, accessible videos that can be integrated into a number of psychology courses. We scoured YouTube for design inspiration, pilot-tested the video storyboards with introductory psychology students and our own research group, and honed our acting skills. In content, design, and production, we worked to make the videos as clear, appealing, and dynamic as possible for undergraduates. Starting with “What is Gender-Based Analysis?” we move through “Conceptualizing Sex vs. Gender,” “Setting Research Priorities and Outcomes,” “Rethinking Concepts and Theories,” “Formulating Research Questions,” “Analyzing Factors Intersecting with Sex and Gender,” and “Language and Visual Representations.”

In each video, we outline the concepts and methods involved in each step, using examples from the psychology research literature. We also provide teaching guides to help instructors use the videos effectively in the classroom. All of the material and resources are available at the Psychology’s Feminist Voice website and on our YouTube channel. Remember, gender matters!

Alexandra Rutherford is a professor of psychology at York University in Toronto. Her work focuses on the history of feminist-scholar activism in psychology and its impact on society. She is the founder and director of the Psychology’s Feminist Voices Oral History and Digital Archive Project (www.feministvoices.com), which documents and analyzes the relationship between feminism and psychology. She can be contacted via apsobserver@psychologicalscience.org.

With help from the APS Fund for Teaching and Public Understanding of Psychological Science, Lisa Cantrell’s podcast on psychological research has grown its audience to nearly 20,000 listeners over the last 2 years.