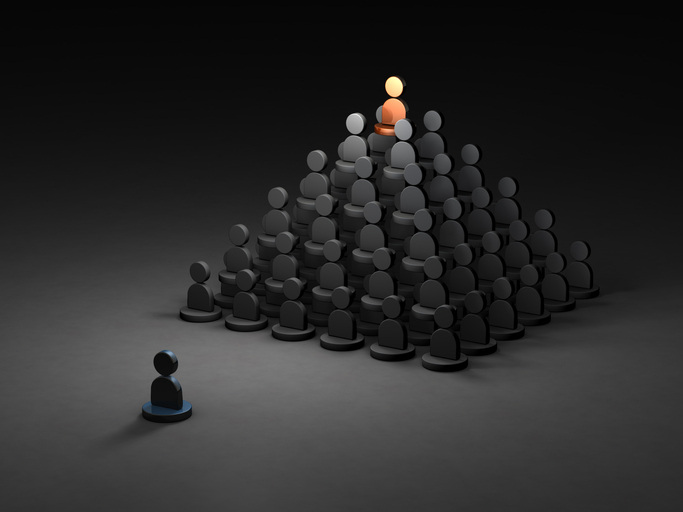 Social status shapes the lives of even the most humble among us. In group settings, people with greater wealth, intellect, and physical prowess tend to occupy the top of the social hierarchy, basking in the respect and influence this position affords them. But while humans are fundamentally motivated to boost their social status to some degree, narcissistic individuals are driven to climb the social ladder at all costs. A review of the research by Stathis Grapsas (Tilburg University, the Netherlands) and colleagues in Perspectives in Psychological Science may provide an explanation for how and why.

“Narcissists are driven by a dominant status motive, meaning that it overshadows other motives, such as the motive for affiliation,” the authors write.

According to the researchers’ status pursuit in narcissism Status Pursuit in Narcissism (SPIN) model, narcissism — a personality trait characterized by a heightened sense of self-importance and entitlement to special treatment — is the result of individual differences in the regulatory processes and behaviors surrounding the pursuit of social status.

Because of the dynamic nature of social hierarchies, the motive for social status can only be satisfied briefly, the researchers explain. This means that even high-status individuals must continually take actions to maintain or improve their position — and through it, their access to resources, social influence, and mating opportunities.

“If individuals engage in these status-pursuing processes repeatedly, then these processes might crystallize into [personality] traits over time,” the researchers explain. Unlike the average person, however, a narcissistic individual’s drive to pursue social status isn’t tempered by the need to maintain close relationships.

This plays out through a process consisting of situational selection, vigilance, appraisal, and response execution. Narcissists tend to select social situations in which they are likely to increase their status, the researchers write, paying vigilant attention to the social cues that indicate the status of others. They then use this information to appraise which of two strategies is most likely to increase their status: self-promotion or other-derogation.

Narcissistic individuals often go out of their way to showcase their talents and abilities as a way of increasing their own status, the researchers explain. When a narcissist perceives someone as a threat to their social success, however, they may instead choose to employ a more combative set of behaviors, such as insults and intimidation, as a way of decreasing their supposed opponents’ social standing.

Narcissists’ attempts to worm their way up the social hierarchy without regard for the feelings of others can also result in serious fallout — even for their own lasting well-being. To examine how narcissistic individuals mismanage these social dilemmas, APS Fellow W. Keith Campbell, Amy B. Brunell, and colleagues tasked 232 university students with running a fictitious forestry company. Students were informed that they represented one of four forestry companies operating in this area, and that while they could harvest up to 10 hectares of forest per year, the remaining foliage would grow back at a rate of just 10% per year. Each set of four participants then privately reported how much they wanted to harvest over 25 rounds, or until the forest was depleted.

Participants who scored higher on the Narcissistic Personality Inventory (which asked individuals to rate the truth of statements such as “If I ruled the world it would be a much better place”) reported a higher desire for profit, and groups of participants who scored higher for narcissism on average were found to deplete the forest more quickly in the pursuit of short-term profit.

“Narcissism provided a benefit to the self, but at a long-term cost to other individuals and to the commons,” Campbell and colleagues write.

In addition to neglecting the needs of others, individuals high in narcissism — commonly considered one of the “dark triad” of personality traits, alongside Machiavellianism and psychopathy — are often arrogant, quarrelsome, and exploitative. Just because someone has a highly narcissistic personality, however, does not necessarily mean that they would meet the criteria to be formally diagnosed with narcissistic personality disorder, a distinct clinical condition not explored in this body of research, Grapsas stresses.

The researchers take a unique SPIN on narcissistic personality types. Learned a lot from this. Thank you.