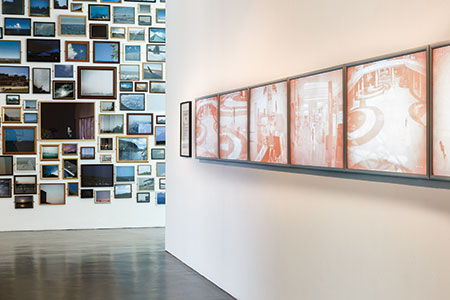 British artist A.R. Hopwood worked with psychological scientists to create the work that appears in his exhibition False Memory Archive, which is currently touring the United Kingdom. Pictured in the foreground is Hopwood’s “Security Guard (Lost in the Mall).” “Erased UFOs” appears in the background. Photographer: Steve Tanner

Over the past decades, psychological scientists have debunked the notion that human memory provides a reliable record of actual events. The well-known work of APS Past President Elizabeth F. Loftus, who in a classic experiment convinced study participants that they got lost in a shopping mall as children even though no such event had ever occurred, is an example of how memories are subject to after-the-fact revisions.

In collaboration with Loftus and other psychological scientists, including UK researchers Sergio Della Sala, a University of Edinburgh professor and APS Fellow, and James Ost, University of Portsmouth, Hopwood is showcasing his work on false memories in a national tour that will run through August 2014 in the United Kingdom.  His exhibition features a film recorded by memory researcher Kimberley Wade of the University of Warwick on a “SenseCam,” a device worn around the neck and used by people with amnesia to record their experiences. Hopwood invited Wade to take a hot air balloon ride and record the excursion on a SenseCam because one of her own experiments involved using doctored photos to make study participants “remember” taking a childhood hot air balloon ride that never happened. The exhibition also features a vinyl LP recording of Exit Latency “silences” from a word-list memory experiment by Ost.

Hopwood has published a list of false memories at www.falsememoryarchive.com, where the public is invited to submit their own false memories. “I thought that my mother left me for 2 years when I was a child to look for work,” reads one testimonial on the website. “I found out in my 20’s that she was only gone for 2 weeks.”  Overall, the project aims to use empirical findings to explore what kind of “truth” false memories offer. It has been covered by BBC News, Dazed Digital, and other media outlets.