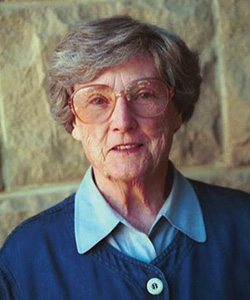 APS William James Fellow Eleanor E. Maccoby, widely considered to be one of the most influential psychological scientists of the 20th century, passed away December 11 at the age of 101. She is recognized worldwide for her research on gender development and differentiation and parent-child relationships.

Maccoby was the first woman to serve as chair of Stanford University’s Department of Psychology, holding that position from 1973 to 1976. At Stanford, she was associated with the university’s Center for the Study of Families, Children and Youth, where she became known for research on the social and intellectual development in children. She made key contributions to the study of differential development in girls and boys, infants’ emotional attachments, and the effects of divorce on children.

The author or coauthor of 11 books, Maccoby is best known for the 1980 book, The Psychology of Sex Difference, co-authored with APS Fellow Carol Nagy Jacklin. In the book, they reviewed evidence of psychological differences between the sexes in an effort to determine which beliefs were based in fact and which were not. They also discussed major theories about the basis of sex differentiation, arguing that, in addition to being influenced by their biology and social environment, children engaged in what they called “self-socialization.” The book challenged widely held stereotypes about the innate differences between boys’ and girls’ abilities.

In the 1980s, Maccoby co-led a groundbreaking study of the effects of divorce on children. She followed about 1,000 California families who began divorce proceedings in 1984-85 and found that fathers stayed substantially involved with their children over time even though mothers remained the primary caretakers.

In the later stages of her career, Maccoby explored how gender identity helps shape our lives in families, schools, relationships, and the workplace. In a 2013 interview for the APS video series Inside the Psychologist’s Studio, Maccoby told APS Past President Kay Deaux that she became interested in gender issue because “professional women at that time in a sense lived with the consequences of sexism. A group of us did work to try to see if we could redress some of those things.”

Among her many honors, Maccoby was elected to the National Academy of Sciences in 1993.