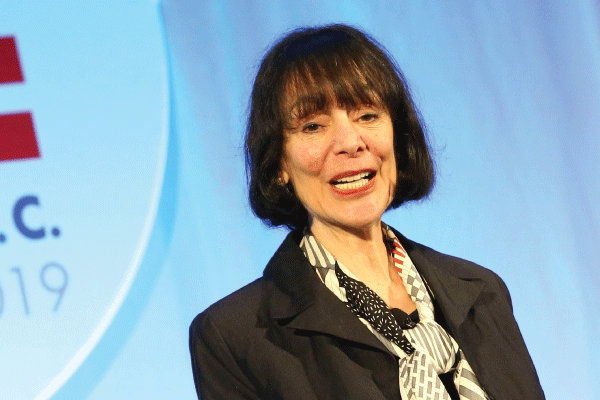 Several summers ago, a colleague sent Carol S. Dweck, a professor at Stanford University whose research has defined the field of mindset psychology, a photo of her 5-month-old nephew beaming with joy as he turned on a computer for the first time.

“It struck me: That’s what we were all like. We were all once that excited about learning something new,” Dweck said during her APS-David Myers Distinguished Lecture on the Science and Craft of Teaching Psychological Science at the 2019 APS Annual Convention in Washington, D.C.

However, when they are older, she continued, an alarming number of students report being overwhelmed by anxiety and depression to the point that it makes it difficult to function, much less achieve their academic potential. This can lead students to seek desperate solutions, but mindset science can play a role in helping to spark students’ love of learning again, said Dweck, a recipient of the APS James McKeen Cattell Fellow Award, the William James Fellow Award, and the APS Mentor Award.

There are two theories of intelligence, referred to simply as mindsets, that students can have about their intellectual abilities, although no one has purely one or the other, she said. Individuals with more of a fixed mindset believe that their intellectual abilities are simply fixed. They tend to approach learning with the goal of looking smart, and they often shy away from challenges because they believe that having to work hard at something or making mistakes means they don’t have high ability. Those with more of a growth mindset, on the other hand, believe that abilities can be developed—they are more likely to see effort as something that propels learning and to see setbacks as opportunities to build new skills.

These divergent mindsets are also reflected in how individuals process mistakes on a neurological level. In a study of 25 undergraduate students, Jason S. Moser (Michigan State University) and colleagues tasked participants with rapidly identifying the center letter in a string of similar text (e.g. “M” vs. “N”) while monitoring activity of the anterior cingulate cortex (ACC) and related brain areas associated with cognitive control of behavior, via electroencephalography. The students also completed a scale designed to measure fixed and growth mindsets.

Over the course of 480 trials, participants with growth mindsets demonstrated greater error positivity and greater electrical activity in the ACC and related brain regions associated with attending to mistakes compared with those with fixed mindsets. This boost in Pe was also associated with greater posterror accuracy, suggesting that these participants were processing errors more deeply, allowing them to make corrections immediately.

“A growth mind-set leads to an increased likelihood of learning from mistakes,” Moser and colleagues wrote in Psychological Science.

Even mindsets themselves aren’t fixed — multisession, in-person interventions have been found to help those who are struggling academically, Dweck said. However, the time and resources required by this “boutique remedy” can make it difficult to scale, creating a gap that Dweck and colleagues aimed to fill by moving the intervention online during their National Study of Learning Mindsets.

The study followed a nationally representative sample of 12,000 ninth-grade students from 65 US schools as they made the transition to high school. Those in the intervention condition participated in a 45-minute online session designed to counter the belief that intelligence is fixed and that effort or mistakes indicate lack of ability. The students then summarized what they had read in their own words and advised a hypothetical student on how to apply these findings to his or her own education. The session in the control condition focused more generally on brain function during learning.

Students who received the intervention reported a reduction in fixed mindset beliefs compared with those in the control group. This was also accompanied by an increase in GPA for lower achieving students and an increase in advanced math course enrollment in the following year across achievement levels.

Even when students engaged with the intervention, however, a growth mindset was far more likely to take root when their school’s institutional culture, and their teachers and peers in particular, were supportive of challenge seeking as well, Dweck said.

Mindset isn’t just about what students bring to the table: Teachers’ mindsets make a difference, too.

In a longitudinal study of 150 science, technology, engineering, and math (STEM) professors and their 15,000 students, Elizabeth A. Canning (Washington State University), APS Fellow Mary C. Murphy (Indiana University), and colleagues found that classrooms led by professors who believed ability is a fixed attribute had racial achievement gaps up to twice as large as courses taught by faculty with a growth mindset. On the flip side, racial minority students in classes taught by growth-mindset professors significantly outperformed minority students in fixed-mindset classrooms.

It’s possible that fixed-mindset beliefs may cause cultural stereotypes — including the idea that White and Asian students are more “naturally gifted” in STEM than Black, Latino, and Native American students — to become more salient, hindering student performance, Canning and colleagues write in Science Advances. Because older White men are stereotypically depicted as “gatekeepers of science,” fixed-mindset beliefs may be more threatening coming from them, the authors write. However, fixed-mindset beliefs were found to be just as damaging regardless of professor identity. Educators’ race, gender, teaching experience, and tenure status had little to no relationship with a classroom’s racial achievement gap when taking mindset beliefs into account.

“Faculty mindset beliefs predicted student achievement and motivation above and beyond any other faculty characteristic,” Canning and colleagues wrote.

The question, then, Dweck continued, is how to create environments that emphasize this kind of growth and improvement, a guiding principle of her freshman seminar course at Stanford.

Dweck said she begins her freshman seminar at Stanford by acknowledging how daunting the beginning of college can be. At the same time, she tries to give students a new orientation toward school.

Their old job was getting as many As as possible and acing the achievement test to get into college, she continues. Now, their job is to use the university’s resources to become the people they want to be—the people who will make their contributions to the world.

The rest of the course’s readings, critiques, and research projects are designed to help them develop a growth mindset that they can use in service of this contribution — a more outwardly directed goal than individual “purpose” or “passion,” Dweck said. The assignments ask students to examine what triggers them to revert to a fixed mindset, to go outside their comfort zone in their academic and personal lives, and to use what they’ve learned about growth mindsets to mentor an important person in their life that they think is being held back by a fixed mindset.

Every few weeks, Dweck also sets aside class time for a discussion about what students are struggling with, an activity that often expands to fill the entire class session. At first, she was concerned this meant she wasn’t teaching the material enough, but the students — in line with researchers’ findings about student social norms — said they were learning an incredible amount by listening to one another.

Found your work on Mindsets is complimentary to my basic beliefs in what my faith says about my purpose in life and my commitment to help others change their mind about what they can live, do and be.