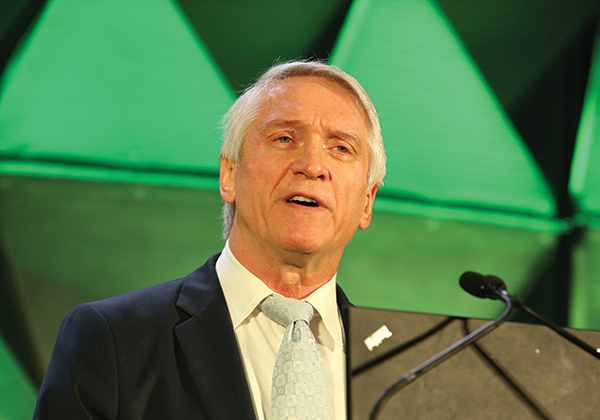 Reducing the stigma associated with mental illness can be every bit as challenging as the basic research, but Stephen P. Hinshaw’s trajectory has been to tackle both.

Understanding normative patterns of development should facilitate knowledge about psychopathology, and understanding atypical development should enhance the study of normal development. Right? That’s the core idea behind developmental psychopathology, as APS James McKeen Cattell Fellow Stephen P. Hinshaw of the University of California, Berkeley, explained in his Award Address delivered at the 2016 APS Annual Convention in Chicago. He has dedicated his career to researching the underlying mechanisms that lead to conditions such as attention-deficit/hyperactivity disorder (ADHD) and to using clinical trials to further understand core processes of change. But, as he elaborated, the translation from basic developmental science, cognitive science, and neuroscience to child and adolescent mental disorders is far from smooth. Even more, solutions to reducing the stigma of mental illness may be just as elusive — but just as important — as understanding the biological and contextual underpinnings of these conditions in the first place.

Hinshaw decried the reductionist thinking that still persists in too many corners of the field. The underlying symptom dimensions of inattention and hyperactivity/impulsivity in ADHD have a heritability of between .75 and .8, higher than the genetic liability for schizophrenia, defying the myth that these patterns are the product of weak personal will or lax parenting. The heritable mechanisms include delayed development of the frontal cortex, deficits in executive functioning and inhibitory control, and reduced levels of intrinsic motivation. But it’s also clear that maladaptive parental responses to early disruptions in temperament and behavior fuel continuation of the symptoms and foster escalations of additional impairments. Such is the case even in adoptive families, in which the effects of gene–environment correlation are removed. According to Hinshaw, it’s integration, rather than either/or thinking, that’s the key with respect to both basic research and clinical efforts.

People with ADHD are at heightened risk for a number of negative outcomes including academic underachievement, increased risk for accidental injury, and peer rejection. Yet incredibly common, Hinshaw says, is “the oft-held contention that ADHD is just a societal excuse for bothersome behavior. If you want to see real ridicule, just look at the op-eds about ADHD in The New York Times [saying] the medications are poison and it’s a made-up disorder. You don’t see this same kind of discussion about the legitimacy of PTSD [post-traumatic stress disorder] or bipolar illness. There’s something about ADHD that’s attracting a lot of negative attention — fueling stigma.”

Yet some skepticism may be deserved. After all, most ADHD diagnoses are made by a pediatrician (or, for adults, by a general practitioner) during the course of a 10- to 15-minute office visit, often without the use of any evidence-based practices. Accordingly, rates of diagnosis have skyrocketed over the past decade — a 42% increase in youth over the past 10 years. “That’s an epidemic,” Hinshaw says. “But ADHD is of course not a communicable disease, so what would explain this increase?”

There may be valid reasons, including increased survival of low-birthweight babies and greater recognition of the condition’s validity. Though ADHD was once overwhelmingly diagnosed in White, middle-class boys, Hinshaw reports that the disorder is actually an equal-opportunity condition — but the diagnosis is increasing especially rapidly in low-socioeconomic-status minority kids. His research has illuminated how shifts in social and educational funding policy have contributed to the rise of the ADHD epidemic. As US public schools have been incentivized to maintain high standardized test scores, Hinshaw has found associated spikes in ADHD diagnoses, particularly in a state’s poorest school districts. In fact, in some states, the test scores of kids labeled as “special ed” (including those of children with an ADHD diagnosis) are excluded from the district’s scores, revealing a perverse incentive to diagnose children.

In addition, although medications are clearly evidence-based treatments for symptom relief, it nearly always takes active engagement of parents and teachers through psychosocial interventions to boost academic and social competencies. Again, Hinshaw says, it’s not all biology or all context; it’s the operation of both in tandem.

Another myth that has stubbornly persisted is that ADHD exists only in boys, though in fact it can have just as much of an impact on girls. After tracking a large cohort of girls carefully diagnosed with ADHD across 16 years, Hinshaw’s team found that by age 20, 51% of girls diagnosed with ADHD featuring early impulsivity were involved in moderate to severe levels of nonsuicidal self-harm, and 23% had made a serious suicide attempt. The control group of girls without an ADHD diagnosis had a 19% rate of self-harm and a 6% rate of suicide attempts. Levels of response inhibition, peer victimization, and peer rejection during adolescence partially mediated such predictive associations. Even more, early maltreatment in conjunction with early impulsivity propelled the rate of attempted suicide to around 35%, revealing again the interplay of biological and environmental risk.

“If you think that ADHD is simply a categorical box in [the] DSM, you’d be mistaken,” Hinshaw argues. “Rather than static, it’s an extremely dynamic set of traits interacting with multiple contextual influences across development.”

When it comes to stigma, it would be logical to believe that it should decrease as public knowledge about mental disorders increases, right? Well, not quite.

We have assumed that, as knowledge about the biological, genetic, and environmental mechanisms underlying conditions such as ADHD progresses, the social stigma of mental illness inevitably will decline. But, as more and more research has found, merely educating the public about these mechanisms has failed to erase stigma.

“Is the solution that we just need to call mental illness a brain disease — a disease like any other? Cancer is a disease; so mental illnesses are diseases of the brain, often highly heritable. And if we give this biogenetic ascription — it’s an uncontrollable cause — stigma will go down. But this contention is wrong,” Hinshaw says. “As it turns out, when you believe that mental illness is caused biogenetically you blame the individual less, but you also believe that he or she will never get better — after all, it’s in their genes — and you don’t want to be anywhere near that person; that is, social distance magnifies.”

Meta-analyses examining mental illness and stigma in the United States have shown that although public knowledge about the underlying causes of mental illness has grown tremendously over the past 50 years, negative perceptions have remained flat or even increased. Hinshaw points out that today more than 3 times as many Americans believe that mental illness is inevitably linked to violence as was the case in 1955. Stigma prompts a lack of funding for mental disorders, a lack of access to care, and the internalization of stigma by people experiencing relevant conditions.

So what can be done to prevent stigma? Contact, rather than factual knowledge, is crucial, Hinshaw says. He has been working with a group called Bring Change 2 Mind to establish high school clubs focused on changing the way young people talk about mental illness.

The Let’s Erase Stigma (LETS) clubs meet once a week with a teacher — not a mental health care provider — as the advisor, just like any other school club. This provides kids with a space to talk about mental health topics in a safe, supportive environment. The goal is to foster open discussion about topics like bullying, LGBTQ issues, and what actions can be performed to open up dialogue and normalize conversations about mental health and encourage peer-to-peer learning.

“Attitudes towards gay marriage have changed radically in the last 20 years, mainly because of people under 30,” Hinshaw adds. “It’s going to be young people turning on their natural empathy and activism to make a big difference.”

In a quasiexperimental test, Hinshaw and colleagues found that while a semester of participation in these clubs didn’t greatly improve knowledge of symptoms of mental illness, it did reduce social distance and promote positive attitudes toward mental health in general. Hinshaw’s team is currently working on a clinical trial in which LETS clubs are randomly assigned to start early or later in the school year to see if this kind of self-help model can decrease social distance and lead to increased antistigma actions.

“It’s a moving time for me to be an award winner at APS. I’ve been a scientist my whole life, because I grew up in a family with a lot of mental illness and a lot of high achievement, often in the same people,” Hinshaw says.

Stigma in mental health remains a huge issue: The World Health Organization data show pretty clearly that the burden of mental illness worldwide is increasing rather than decreasing. Suicide is now the leading cause of death for adolescent girls, globally. It’s going to take a game-changing group of efforts to address this issue. With the right scientific approaches, however — tests of mediation, multiple levels of analysis, experimental trials when possible, global Big Data analyses — and a public and government motivated to change, we might actually reduce the burden of mental illness, Hinshaw concludes.