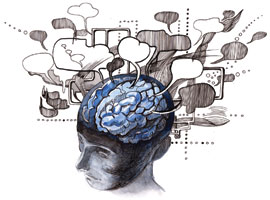 It’s the end of the day, and you’ve read the beginning of that article for journal club three times, but whenever you get to the middle of the introduction, your thoughts keep turning to that experiment you’re going to run in the morning. Whether we like it or not, our minds wander frequently, and, as a new study in Psychological Science shows, working memory is partially to blame.

Working memory is a sort of mental workspace that allows you to juggle multiple thoughts all at once. Researchers tested the role of working memory in mind wandering by having volunteers perform a visual-search task in which they had to find a target letter contained in a circle of non-target letters. In some trials, the non-target letters were all O’s (low perceptual-load condition) and in others they were a mix of letters (high perceptual-load condition). A peripheral distracter was also shown to the left or right of the circle.

After completing the task, participants reported what they had been thinking about — either the task or something unrelated to the task — and were assessed for working memory. The researchers found that working memory was related to non-task thoughts only in the low perceptual-load condition.

“What this study seems to suggest is that, when circumstances for the task aren’t very difficult, people who have additional working memory resources deploy them to think about things other than what they’re doing,” says Jonathan Smallwood of the Max Planck Institute, one of the study authors.

But people who have high working memory capacity aren’t doomed to perpetual mind wandering. The research suggests people can control working memory like other mental resources. Of course, it might not feel like you have control when you’re reading the first paragraph of that article — for the 10th time.

I found this article so informative and eye-opening!
Thank you mental health professionals for constantly researching to finding additional ways to assist us!

I agree! I found this article very interesting and informative.