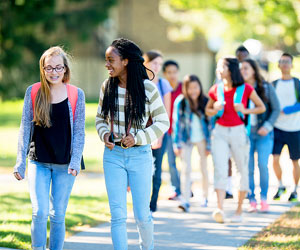 “We know that faces convey a lot of different social information, and the ability to perceive and interpret this information changes through development,” explained psychological scientist Suzy Scherf of Penn State, senior author on the study. “For the first time, we’ve been able to show how puberty, not age, shapes our ability to recognize faces as we grow into adults.”

According to Scherf, this retuning of the face processing system, from showing a bias toward adult female faces as children, to preferring peer faces that match their own developmental stage in puberty, is part of the social metamorphosis that prepares adolescents to take on adult social roles. “In other words, it literally changes the way people see faces. This has been shown previously in research published in animal literature, but not in humans.”

Scherf and graduate student Giorgia Picci developed an innovative experimental design that proves a bias to remember peer faces is reflected in the pubertal stage of the face, rather than the age of the face, which is how previous researchers investigated these biases. “We were able to show that puberty shapes the subtle emergence of social behaviors that are important for adolescents’ transition to adulthood. This likely happens due to hormones influencing the brain and the nervous system reorganization that occurs during this time,” said Scherf.

The researchers recruited 116 adolescents and young adults for the study and separated them into four pubertal groups depending on their stage of puberty. Importantly, the adolescents in the study were all the same age, but differed in their stage of puberty.  Therefore, any differences in the way they responded to faces were related to their pubertal status, not their age. Scherf and Picci determined the adolescents’ stage of development through self-assessments as well as parent-provided assessments.

Participants were asked to look at faces from all four pubertal groups, and the researchers measured their face-recognition ability using a computerized game. After studying 10 target faces with neutral expressions, participants were shown another set of 20 faces with happy expressions and had to identify whether they had seen each face previously or if they were new.

This research will help scientists uncover how puberty impacts the developing human brain and help them understand the timetable of behavioral and brain changes during adolescence, which could guide mental health treatment and inform public health policy. In the future, Scherf and Picci plan to further investigate face processing changes that occur during puberty.

This work was supported by the Social Science Research Institute, the Pennsylvania State University Department of Psychology, and a National Science Foundation Graduate Research Fellowship (No. DGE1255832).