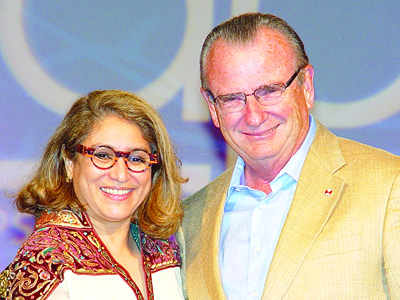 APS Fellow Gary Latham had many goals when he left graduate school, but returning to academia was not one of them.

“I made the decision that I did not want to be an academic,” said Latham in his 2011 James McKeen Catell Fellow Award Address. “At the time, I wanted to go directly into industry and have a positive effect on the lives of employees.”

Many years later, Latham is what he never predicted he would be — an academic at the University of Toronto. But before returning to the ivory tower, Latham spent decades as a staff psychologist in industry, and at the 23rd APS Annual Convention, Latham gave attendees a “bird’s-eye perspective” of the practical theories he developed over his many decades of field work.

One of the theories Latham is most proud of, and best known for, is goal-setting theory. Latham developed the theory with Edwin Locke (who received the James McKeen Cattell Fellow Award in 2005) in the late 1960s. The gist of the theory, said Latham, is that a specific high-level goal leads to higher performance than no goal or an abstract goal such as encouraging people to try hard.

“Goals affect choice, goals affect effort,” said Latham. “If you have a high goal you’re going after, it stimulates the pursuit of strategies.”

Some of the first evidence to support their theory came from a study Latham conducted with loggers. He found that loggers who were given a specific number of trees they had to chop down performed better than loggers who were just told to do their best. Latham said goals likely led to improved performance because “the goals turned an otherwise meaningless task into a game.”

Latham’s later studies examined the connection between goals and employees’ motivation. He found that how the goals are determined makes a difference in performance. When employees had the chance to participate in setting goals, they performed better than when goals were assigned to them or they were given no goals at all. People in the participative condition also set significantly higher goals. Yet, Latham also found that assigned goals were just as effective as participative goals when employees were provided the rationale behind the assigned goals.

Though a good portion of Latham’s research revolves around goal setting, he has also explored other behavioral aspects of work environments. He tackled the ubiquitous performance review, developing a tool called the behavioral observation scale so that employers could evaluate employees based on specific desirable behaviors, rather than general traits such as being a “self-starter.”

When he was assigned to help hire employees for a saw mill in St. Louis, MO, Latham got a chance to work on improving hiring processes. While sitting in the airport on his way to St. Louis, drink in hand, Latham came up with a new approach for interviewing employees.

“Suddenly it came to me,” said Latham. “The behavioral observation scales are derived from a job analysis procedure called the critical incident technique…and goals are the immediate regulator of behavior. So I went wow, suppose we pose a situation and we simply said, ‘Here’s the situation, what are you going to do?’ ”

The result was an evidence-based interview strategy called the situational interview in which potential employees are asked how they would act during specific work situations. Then their answers are scored based on a Likert-type scale that reflects the values of the hiring organization.

“Intentions or goals predict behavior,” said Latham. “If you can figure out what their intentions are, you’ve got a high likelihood of being able to predict how they are going to do on the job.”

Latham may not have intended to become an academic when he left graduate school, but even when he was working in industry, one thing that tied all of his various projects together is that they were based on strong theories.

“Nothing is as practical as a good theory,” said Latham. “Because it’s theory that helps you develop a framework for what you want to do.”

And nothing helps scientists set their own goals better than a good theory.