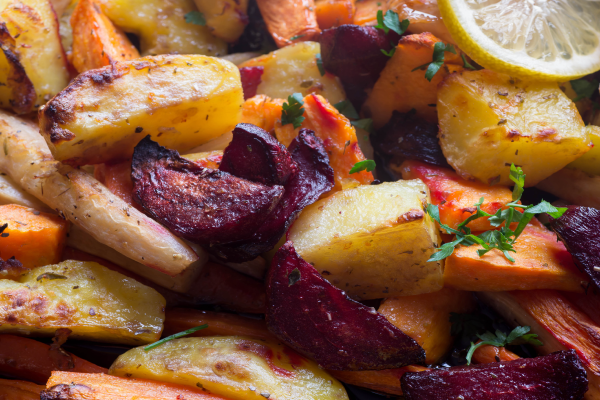 Most people want to eat healthier, but efforts to encourage healthy eating by providing nutrition information have not drastically changed habits. A new study suggests that labels emphasizing taste and positive experience could help.

Evocative labels such as “twisted citrus glazed carrots” and “ultimate chargrilled asparagus” can get people to choose and consume more vegetables than they otherwise would—as long as the food is prepared flavorfully, researchers at Stanford University have found. Their findings appear in Psychological Science.

“This is radically different from our current cultural approach to healthy eating which, by focusing on health to the neglect of taste, inadvertently instills the mindset that healthy eating is tasteless and depriving,” said Alia Crum, an assistant professor of psychology and the senior author on the new paper. “And yet in retrospect it’s like, of course, why haven’t we been focusing on making healthy foods more delicious and indulgent all along?”

About three years ago, Crum, Brad Turnwald and graduate student Danielle Boles partnered with Stanford Residential & Dining Enterprises to try out a new approach to encourage healthy eating. Culling adjectives from language that popular restaurants used to describe less healthy foods, they came up with a system for naming vegetables that focused on the flavors in vegetable dishes along with words that created the expectation of a positive eating experience—hence “twisted citrus glazed carrots.” That study, published in 2017, showed that decadent-sounding labels could get people to eat vegetables more often than they would if the vegetables had neutral or health-focused names.

Crum, Turnwald and colleagues have now extended those findings by repeating the experiment at additional university dining halls around the United States. In collaboration with the Menus of Change University Research Collaborative — a nationwide network of 57 colleges and universities pioneering research to improve healthy and sustainable eating — the team tracked nearly 140,000 decisions about 71 vegetable dishes that had been labeled with taste-focused, health-focused, or neutral names.

The team found that giving vegetables taste-focused names only worked when those dishes were indeed delicious. At one school where diners thought the vegetable dishes in general weren’t as tasty, labeling them using tasty descriptors had little impact.

Taste-focused labeling works, Crum said, because it increases the expectation of a positive taste experience. In particular, references to ingredients such as “garlic” or “ginger,” preparation methods such as “roasted,” and words that highlight experience such as “sizzling” or “tavern style” help convey the dish is not only tasty but also indulgent, comforting or nostalgic. For example, “twisted citrus glazed carrots” works because it highlights the flavor, while “absolutely awesome zucchini” fails because it is too vague.

The study is part of a broader project to make healthy foods more crave-worthy and less like something we tolerate because they’re good for us. That effort also includes Stanford SPARQ’s “Edgy Veggies” toolkit, a step-by step guide for how to implement taste-focused labeling that draws on Crum and Turnwald’s studies.

In the long run, Crum, Turnwald, and colleagues believe, the combination of research and tools that enable real-world change could have a broad impact on eating habits.

“College students have among the lowest vegetable intake rates of all age groups,” Turnwald said. “Students are learning to make food decisions for the first time in the midst of new stresses, environments, and food options. It’s a critical window for establishing positive relationships with healthy eating.”

Crum is also a member of Stanford Bio-X and the Maternal and Child Health Research Institute. Additional Stanford authors include Jaclyn Bertoldo, assistant director for food choice architecture at Stanford Residential & Dining Enterprises; Christopher Gardner, a professor of medicine; and Margaret Perry, a graduate student in psychology. Other authors include researchers from Rutgers University, Northeastern University, the University of North Texas, Lebanon Valley College, the University of Southern California and the Menus of Change University Research Collaborative.

This article has received badges for Open Data and Materials and Pregistration.