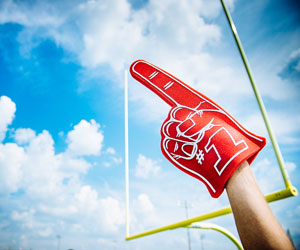 Every day, millions of people – including senators, doctors, and teachers — make consequential decisions that depend on predicting how other people will feel when they experience gains or setbacks.

New research looking at events ranging from college football games to US elections shows that our predictions about others are less accurate when we have information about the groups they belong to, such as which political party or sports team they’re rooting for. This research suggests that our reliance on stereotypes about social groups interferes with accurately predicting how others will feel.

Most of the decisions that we make in our daily lives, whether choosing sandwiches, vacations, or medical procedures, involve predictions about how much pleasure or pain we’ll experience given various possible outcomes. This kind of prediction, what researchers call an “affective forecast,” also plays a critical role in the decisions we make for others.

“Doctors might try to gauge the amount of pain people are in when deciding the kinds of drugs to prescribe them, employers might consider how happy their employees would be made by a smaller or larger holiday bonus, and politicians may consider the pain and distress that people are experiencing when deciding whether to intervene in a humanitarian crisis,” notes psychological scientist and study author Mina Cikara of Harvard University.

“We might expect that knowing more about a person would allow us to make better predictions of how they would react to events like their team winning a game or their political party winning or losing an election, but we found the opposite,” says Cikara.

In one online study, the researchers took advantage of the 2014 US Senate midterm elections to investigate. They asked 859 participants living in the US to report their political affiliation and to rate the extent to which they identified with both the Democratic and Republican parties. Some of the participants were then asked to predict how an individual (either a “person,” a “Democrat,” or a “Republican”) would feel the day after their party either won or lost the majority in the Senate. Other participants – so-called “experiencers” – were asked right after the midterm election how they felt about the outcome. The researchers then compared the participants’ predictions with the experiencers’ self-reports.

When participants instead made predictions about how an unidentified “person” would feel about his or her party winning or losing the same midterm elections, their predictions were pretty similar to experiencers’ reports of their feelings. Thus, people made predictions that were more extreme and less accurate when they knew the political affiliation of the person they were making predictions for.

The researchers observed similar results in the context of a college football game: the annual game between Harvard and Yale. Students tailgating before the game overestimated how unhappy Yale fans would feel when their team lost, but only when forecasting for a “Yale” fan. They were again more accurate when the school the experiencers belonged to was unspecified.

According to Cikara and her collaborators, the fact that participants made less extreme affective forecasts when they were under time pressure suggests that people probably first think about how anyone would react in the same situation and then proceed to “correct” their prediction, accounting for stereotypes about the group to which the person belongs.

The researchers hypothesize that this bias in affective forecasting may shed light on increasing political and economic polarization:

“While we haven’t explicitly shown a connection between polarization and our effect, it is possible that our observed effect here has a hand in increasing the divide between two groups,” says Lau. “When we overestimate how other members of our own group and the other group feel, and out-group members do likewise, we are building a vicious cycle of expectancy violations that can escalate conflict and other partisan divides, whether at the voting booth, at the negotiation table, or at the trade policy summit.”