Sons whose fathers have criminal records tend to have lower cognitive abilities than sons whose fathers have no criminal history, data from over 1 million Swedish men show. The research, conducted by scientists in Sweden and Finland, indicates that the link is not directly caused by fathers’ behavior but is instead explained by genetic factors that are shared by father and son. 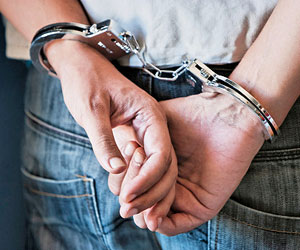 “The findings are important because cognitive ability is among the most important psychological predictors of many important life outcomes, including socioeconomic success and health,” says lead researcher Antti Latvala of the Karolinska Institute in Sweden and the University of Helsinki in Finland.

Research looking across generations in families has shown that children of parents who engage in “antisocial” behaviors — such as rule-breaking, aggressive, or violent behavior — are at greater risk for various negative outcomes, including criminality, psychiatric disorders, substance use, and low academic achievement. And research has also shown that individuals who engage in antisocial behaviors tend to have poorer cognitive abilities than those without antisocial tendencies.

Latvala and colleagues wanted to combine these two strands of research to investigate how parents’ antisocial behaviors might affect their children’s cognitive development.

The researchers took advantage of extensive data collected from Swedish residents, including data on cognitive ability acquired as part of compulsory military conscription and data on antisocial behavior (in this case, defined as criminal convictions) obtained from a national crime register.

And this association seemed to be influenced by the severity of the fathers’ criminal history:

“Perhaps most surprising was the clear gradient seen in the magnitude of the association with sons’ cognitive ability by severity of fathers’ criminality: The more severe crimes the father had committed, the poorer was the sons’ cognitive performance,” explains Latvala.

But did fathers’ antisocial behavior have a direct causal effect on sons’ cognitive ability, or could the link be explained by shared genetic factors?

To find out, the researchers compared the link between fathers’ criminal history and sons’ cognitive ability across cousins whose fathers had varying relationships to each other.

The data, however, suggested otherwise. When the researchers took the varying genetic relationships into account, the association between fathers’ criminality and sons’ cognitive ability gradually diminished.

“Our results thus indicate that despite the adversities related to parental criminality, having a father who has been convicted of crime is unlikely to influence cognitive development in the offspring when the effects of other factors associated with parental antisocial behavior, including genetic risks, are taken into account,” the researchers conclude.

Co-authors on the study include Ralf Kuja-Halkola, Niklas Långström, and Paul Lichtenstein of the Karolinska Institute.