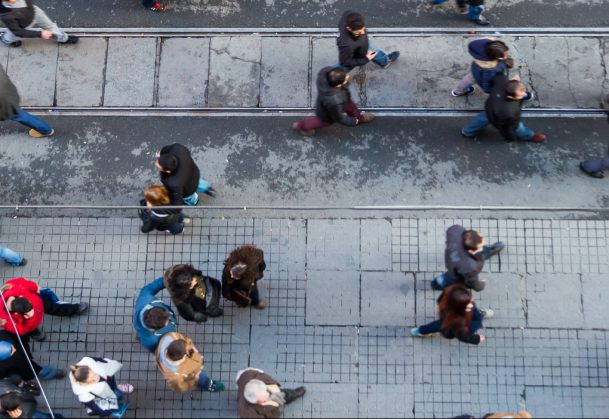 The research shows that people who categorize themselves as being in a relatively high social class spend less time looking at passersby compared with those who aren’t as well off, a difference that seems to stem from spontaneous processes related to perception and attention.

“Across field, lab, and online studies, our research documents that other humans are more likely to capture the attention of lower-class individuals than the attention of higher-class individuals,” says psychological scientist Pia Dietze of New York University. “Like other cultural groups, social class affects information processing in a pervasive and spontaneous manner.”

Previous studies have shown a variety of behavioral differences among people of various social classes — including levels of compassion, interpersonal engagement, charity, ethicality, and empathy toward others. Dietze and co-author Eric Knowles wondered whether these discrepancies might stem, at least in part, from deep, culturally ingrained differences in the way people process information.

The researchers hypothesized that our social class affects how relevant others are to us in terms of our own goals and motivations. Compared with people who come from less-advantaged circumstances, people from relatively privileged backgrounds are likely to be less dependent on others socially; as such, they are less likely to view other people as potentially rewarding, threatening, or otherwise worth paying attention. Importantly, Dietze and Knowles posited that this difference in what they call “motivational relevance” is so fundamental that it manifests in basic cognitive processes — like visual attention — that operate quickly and involuntarily.

In one study, the researchers had 61 pedestrians in New York City wear Google Glass, presumably as a test of the electronic eyewear. The participants walked roughly one block while Google Glass recorded whatever they were looking at, and they also completed several survey measures that gauged social class. In one measure, for example, participants categorized themselves as belonging to either the poor, the working class, the middle class, the upper-middle class, or the upper class.

Later, an independent group of raters watched the recordings and noted the various people and things each Glass wearer looked at and for how long.

Dietze and Knowles then examined whether there were any links between what the participants paid attention to and their social class, taking participants’ ethnicity into account.

Additional findings suggest that this difference in attention stems from spontaneous cognitive processes, rather than deliberate decision making. A total of 393 participants in an online study looked at alternating pairs of images, each of which contained one face and five objects. They were asked to identify whether the images were the same or different. The data revealed that higher-class participants took longer to notice when the face changed compared with lower-class participants; on the other hand, social class didn’t seem to affect how long it took them to detect changes to one of the objects.

In other words, faces seem to be more effective in grabbing the attention of individuals who come from relatively lower-class backgrounds.

“Our work contributes to a growing knowledge base around the influence of social class background on psychological functioning,” says Dietze. “The more we know about the effect of social class differences, the better we can address widespread societal issues — this research is just one piece of the puzzle.”

Dietze and Knowles are expanding this line of research, collecting data in other countries and employing virtual reality technology, to better understand how far the link between social class and visual attention extends.

All data and materials have been made publicly available via the Open Science Framework and can be accessed at osf.io/zgq7m. The complete Open Practices Disclosure for this article can be found at http://pss.sagepub.com/content/by/supplemental-data. This article has received the badges for Open Data and Open Materials. More information about the Open Practices badges can be found at https://osf.io/tvyxz/wiki/1.%20View%20the%20Badges/ and http://pss.sagepub.com/content/25/1/3.full.