Childbirth is physically intense and, for many women, it is the most painful experience they will have. And yet, new research shows that the amount of time a woman spends in labor doesn’t seem to impact how she remembers her labor pain afterwards. 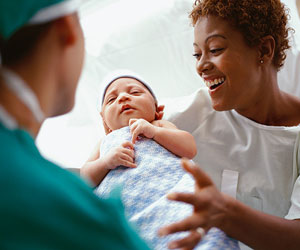 “This phenomenon — called ‘duration neglect’ — is particularly interesting given the common use of epidural analgesia,” says psychological scientist Eran Chajut of the Open University of Israel, one of the authors of the study. “This form of analgesia was developed mainly to counter labor pain, but its everlasting influence on the memory of childbirth is important as well.”

The idea that we tend to remember an experience as a joint product of peak point and end point of the experience while ignoring all other parts is well known to researchers, dubbed the “peak-end bias,” but it has primarily been tested in lab settings using relatively brief experiments. Thus, it remained unclear as to whether the peak-end bias would apply to real life events.

“We’ve been discussing the research of how people combine experiences over time to create a single evaluation of experience, either pain or pleasure, for a long time,” says study co-author Dan Ariely of Duke University. “But the experiments that we’ve been able to conduct have basically been short-term. It’s in these short-term experiments, things that last 10, 30 60, 90 seconds, we’ve found this result of duration neglect.”

Chajut, Ariely, and colleagues decided to examine labor experiences as a particularly strict test for the peak-end bias. Not only does childbirth tend to be long in duration, on the order of several hours, it is also a complex experience: Childbirth is fraught with mixed feelings, it leads to a particularly unique outcome (a new family member), and it’s endowed with powerful personal and cultural significance.

The researchers recruited 320 women to participate in the study. A member of the research team accompanied each woman into the delivery room, and asked her to rate her pain every 20 minutes, on a scale of 1 (no pain) to 100 (the worst pain imaginable).

The researcher then called the new mother 2 days and 2 months after delivery and asked her to use the same pain scale and provide an overall evaluation of her labor pain, from the moment she entered the delivery room up until she gave birth.

The duration of delivery, on the other hand, was not related to recalled pain at either follow-up assessment.

The data also revealed how receiving an epidural can influence women’s memory for labor pain. Although women who received epidurals and those who didn’t experienced comparable levels of pain at the beginning of labor, women who received epidurals remembered having lower levels of pain when asked to reflect on their overall experience later on, despite the fact that they had much longer pain.

“In our study, mothers who received an epidural remembered their pain as relatively moderate — on average they rated their pain at around 70 after 2 days and about 65 after 2 months,” explains Chajut.

This could be due to the fact that women who receive an epidural are likely to feel less pain toward the end of labor, when the epidural has kicked in — the researchers argue that this experience of less end pain combined with duration neglect may lead to remembering less overall pain after the fact.

“In practical terms, these results suggest that epidural analgesia is not only beneficial during childbirth itself but also effective in modulating memory of it,” the researchers write.

In addition to Chajut and Ariely, co-authors include Avner Caspi of the Open University of Israel and Rony Chen and Moshe Hod of Rabin Medical Center.