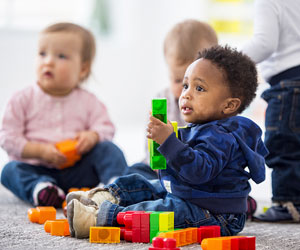 An innovative collaboration between neuroscientists and developmental psychologists that investigated how infants’ brains process other people’s action provides evidence directly linking neural responses from the motor system to overt social behavior in infants.

The study involved thirty-six 7-month-old infants, who were each tested while wearing a cap that used electroencephalography (EEG) to measure brain activity. During the experiment, each infant observed an actor reach for one of two toys. Immediately after, the baby was allowed to select one of the same toys. This procedure was repeated 12 times.

The researchers used EEG to measure a component of brain activity–desynchronization of activity in the mu frequency band–that has been linked to motor cortex activity in adults. Like adults, infants show this response when acting themselves and when watching others’ actions, suggesting that the motor system may play a role in the perception of others’ actions. Until the current study, however, this possibility had not been tested in infants.

Fundamentally, the researchers identified the neural processes that contribute to intelligent social behavior in infants. And it’s the first evidence that motor system activation in infants predicts the imitation of others’ actions, as well as an apparent understanding of others’ goals.

“This is big news, that babies understand what they are observing, that there is a direct connection between observing others, understanding what others are doing, and learning how to act,” said co-author Amanda Woodward, the William S. Gray Professor of Psychology at UChicago.

“Probably the hardest place to study the relation between brain activity and behavior is with infants, due to limitations in the methods that can be used, and the fact that infants are infants,” Woodward noted. “Our methodology represents a breakthrough and a proof of concept.”

“We’ve worked hard over the years to develop the methods that allow us to record brain activity from infants while they are engaged in the social world,” said co-author Nathan Fox, Distinguished University Professor at the University of Maryland, College Park. “The current research reflects our ability to synchronize brain and behavior in infants during the first year of life.”

Although this research will not translate directly into new medical treatments or therapies, it could contribute to medical advances down the road by helping to illuminate how the human brain functions and develops, Woodward added.