News > Latest Research News > How Smartphones Are Affecting Our Relationships 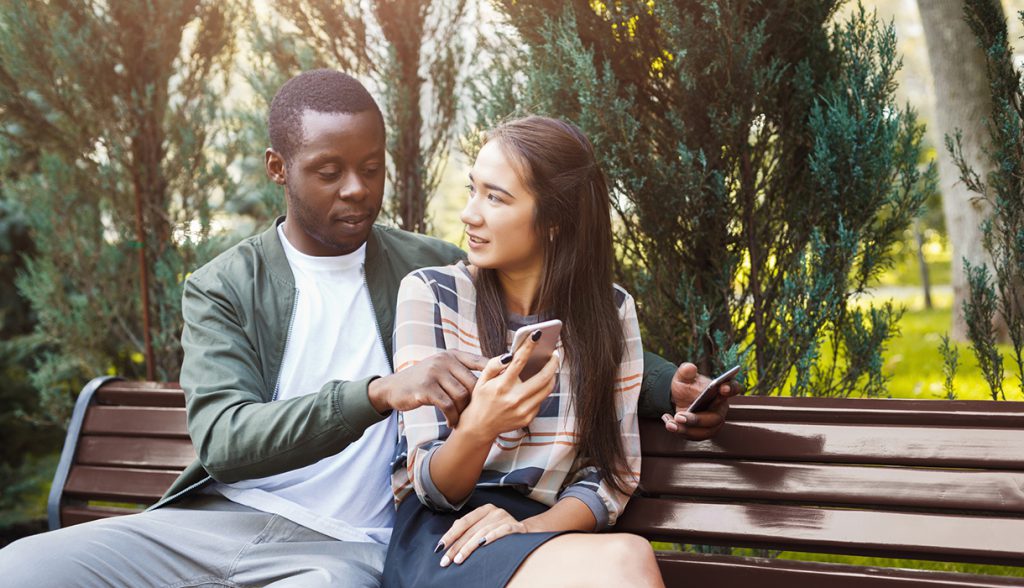 Whether at the supermarket, in the doctor’s office, or in bed at night, it can be tempting to pick up the device and start scrolling through social media or text messages at any moment. But anyone who has done so in the presence of a close friend, family member, or romantic partner may have left that person feeling ignored, annoyed, or even pushed away. That’s according to a growing body of research on “technoference,” or the potential interference smartphones and other technologies can have in our face-to-face social interactions.

In a review paper in Perspectives on Psychological Science, University of Arizona psychology professor David Sbarra and his collaborators at Wayne State University in Detroit examine existing research on technoference. They propose an explanation for why humans are so drawn to their smartphones, even when the devices take us out of the moment in our close relationships. It’s because of our evolutionary history, they say.

Humans are hard-wired to connect with others, Sbarra and his colleagues argue. In the course of evolutionary history, we have relied on close relationships with small networks of family and friends for survival as individuals and as a species. These relationships were based on trust and cooperation, which is built when people disclose personal information about themselves and are responsive to others.

Smartphones, and the constant access they provide to text messaging and social media, make it easier than ever for people to disclose personal information and respond to others in their social networks. And these networks are much larger and more far-flung than those of our ancestors.

“The draw or pull of a smartphone is connected to very old modules in the brain that were critical to our survival, and central to the ways we connect with others are self-disclosure and responsiveness,” Sbarra said. “Evolution shaped self-disclosure and responsiveness in the context of small kin networks, and we now see these behaviors being cued more or less constantly by social networking sites and through our phones. We now have the outer-most edges of our social network cue us for responsiveness. Look no further than the next person you see scrolling through Facebook and mindlessly hitting the ‘like’ button while his kid is trying to tell him a story.”

In their paper, Sbarra and his coauthors go beyond the idea that technology is simply attention-grabbing to suggest that there may be an evolutionary mismatch between smartphones and the social behaviors that help form and maintain close social relationships.

“Smartphones and their affordances create new contexts for disclosing information about who we are and for being responsive to others, and these virtual connections may have downstream unwanted effects on our current relationships,” Sbarra said. “When you are distracted into or by the device, then your attention is divided, and being responsive to our partners – an essential ingredient for building intimacy – requires attention in the here and now.”

Divided attention, Sbarra and his colleagues say, may lead to relationship conflict. For example, the review paper cites a study of 143 married women, more than 70 percent of whom reported that mobile phones frequently interfere in their relationships.

Sbarra doesn’t believe smartphones are all bad. In fact, he and his coauthors acknowledge that the devices offer several benefits for health and well-being, and texting provides many couples a route for connecting in a meaningful way. But they say more research is needed to fully understand the impact that virtual connections may have on our real-world relationships and the ways in which the pull of our phones may diminish immediate interactions and lead to conflict.

“We stay away from the question of whether social networking sites and smartphone use are good or bad, per se,” Sbarra said. “Technology is everywhere, and it’s not going away, nor should it. In this paper, we are interested in answering two basic questions: Why do the devices seem to have such a powerful pull on us? And, what is the state of the science on the effects of being pulled away from our in-person interactions and into the virtual world?”

From there, the authors outline a research agenda they hope can guide future studies. Those studies will be increasingly important as new technologies evolve and become more integrated in our daily lives, Sbarra said.

“Between 2000 and 2018, we’ve seen the largest technological advances, arguably, at any point in the last 100 years,” he said. “We are interested in understanding the role of social relationships in human well-being. We can understand this from the level of what individuals do in relationships, but we can also understand it at the level of societal changes and societal forces that may push on relationships.”

News > Latest Research News > How Smartphones Are Affecting Our Relationships

Smartphones have ruined children’s play time and adult’s special time under the sheets! Can’t even go to a bar to have a chill drink without GF having the damn phone on the bar and in her hand half the time. Maybe I should take a hint! Long live the flip phone MOT V600!

I do believe technology devices and media can get in the way of a relationship but technology device and social media isn’t the problem. The couple shall notice the problem and fix. Put off certain time for the phone and use communication, affection with their partner. If the love each other the media they scroll on should be deleted then the problem is solved most likely.