No matter how we jump, roll, sit, or lie down, our brain manages to maintain a visual representation of the world that stays upright relative to the pull of gravity. But a new study of rider experiences on the Hong Kong Peak Tram, a popular tourist attraction, shows that specific features of the environment can dominate our perception of verticality, making skyscrapers appear to fall.

The Hong Kong Peak Tram to Victoria Peak is a popular way to survey the Hong Kong skyline and millions of people ride the tram every year.

“On one trip, I noticed that the city’s skyscrapers next to the tram started to appear very tilted, as if they were falling, which anyone with common sense knows is impossible,” says lead researcher Chia-huei Tseng of the University of Hong Kong. “The gasps of the other passengers told me I wasn’t the only one seeing it.” 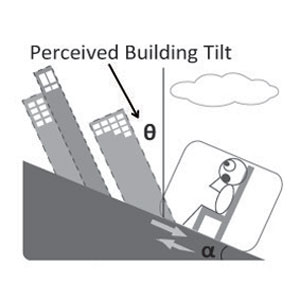 In this schematic diagram of the illusion, the angle θ illustrates the approximate deviation of the perceived tilt relative to gravity for a mountain slope of α.

The illusion was perplexing because, in contrast with most illusions studied in the laboratory, observers have complete access to visual cues from the outside world through the tram’s open windows.

Exploring the illusion under various conditions, Tseng and colleagues found that the perceived, or illusory, tilt was greatest on night-time rides, perhaps a result of the relative absence of visual-orientation cues or a heightened sense of enclosure at night. Enhancing the tilted frame of reference within the tram car — indicated by features like oblique window frames, beams, floor, and lighting fixtures — makes the true vertical of the high rises seem to tilt in the opposite direction.

The illusion was significantly reduced by obscuring the window frame and other reference cues inside the tram car, by using wedges to adjust observers’ position, and by having them stand during the tram ride.

But no single modification was sufficient to eliminate the illusion.

“Our findings demonstrate that signals from all the senses must be consonant with each other to abolish the tilt illusion,” the researchers write. “On the tram, it seems that vision dominates verticality perception over other sensory modalities that also mediate earth gravity, such as the vestibular and tactile systems.”

The robustness of the tram illusion took the researchers by surprise:

“We took the same tram up and down for hundreds of trips, and the illusion did not reduce a bit,” says Tseng. “This suggests that our experiences and our learned knowledge about the world — that buildings should be vertical — are not enough to cancel our brain’s wrong conclusion.”

The study was supported by grants from the Hong Kong Grant Research Council and the University of Hong Kong Seed Funding Programme for Basic Research to Chia-huei Tseng, and by awards from the Serena Yang Educational Fund and the Deutscher Akademischer Austauschdienst (German Academic Exchange Council) and National Science Council of Taiwan to Lothar Spillmann.