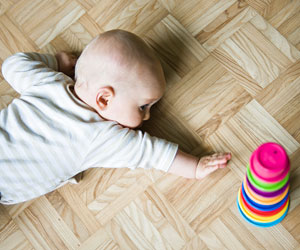 Eight-month-old infants are much more likely to reach towards distant toys when an adult is present than when they are by themselves, according to research published in Psychological Science, a journal of the Association for Psychological Science. The findings suggest that 8-month-olds understand when they need another person’s help to accomplish a task and act accordingly.

“Babies are sensitive to the social context that surrounds them and plan their actions while taking this social context into account,” says study author and psychological scientist Verónica Ramenzoni of the Max Planck Institute for Psycholinguistics in the Netherlands and the National Scientific and Technical Research Council in Argentina. “Our findings show that infants plan their actions in regards not only to what they can do but also to what the social world around them can do for them.”

“This research lends some support to parents’ understanding that their infant’s actions at this age are communicative,” Ramenzoni adds.

Ramenzoni and study co-author Ulf Liszkowski (Max Planck Institute for Psycholinguistics and University of Hamburg) wanted to understand how and when babies begin to communicate. They hypothesized that examining how babies use their developing motor skills and perceptions of the environment to plan and carry out actions might yield some clues.

In one study, the researchers presented 20 8-month-old infants with a series of toys. Some of the toys were placed well within reach, some were just barely reachable, and some were clearly out of reach. In one test block, a parent was in the room with the infant; in another test block, the parent was absent.

Ramenzoni and Liszkowski wanted to see whether the infants would respond to the toys differently under the various conditions. To ensure that the infants were acting of their own accord, the parents were told to respond to their child only if she cried or became fussy.

The results showed that the infants were sensitive to both the physical and social context of the situation, reaching more often for toys that were out of their grasp when their parents were in the room than when they were absent.

And findings from a second study suggest that the potential helper doesn’t have to be a parent. Another group of 8-month-olds also reached for the distant toy more often when an experimenter was with them in the room than when they were alone.

Together, these findings suggest that children’s attempts to communicate using pointing gestures, an ability that emerges around 12 months of age, develops out of earlier communicative skills such as social reaching.

“Many babies that sat there and did not even attempt to grasp ‘unreachable’ objects when they were alone tried really hard to get them when their parent was sitting by them,” she explains.

The fact that they engaged in social reaching regardless of whether the adult in the room was a familiar parent or a relatively unfamiliar experimenter indicates that the infants weren’t reaching merely because they felt more secure around their parents. Rather, it suggests that the infants were planning their actions in the context of a social unit, operating in what the researchers call ‘we-mode.’

“The babies’ behavior is an indication that they perceive adults as expanding their ability to act in the world,” Ramenzoni concludes.