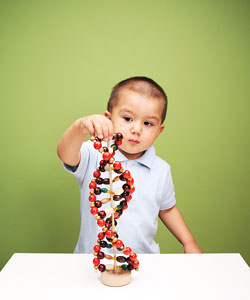 In the earlier study, the Social Science Genetic Association Consortium examined millions of genetic variants in more than 100,000 people and found that these variants could be aggregated and turned into a “polygenic score” that was linked with educational attainment. Participants with polygenic scores above zero were more likely to complete more years of schooling, whereas those with scores below zero were likely to complete fewer years of schooling.

“Getting a good education requires many of the same skills and abilities needed to get ahead in life more generally, so we hypothesized that the same genetics that predicted success in schooling would predict success in life,” says Belsky.

Belsky and colleagues capitalized on longitudinal data from the Dunedin Study, an ongoing study that has followed individuals in New Zealand from birth through their fourth decade. The study includes a representative sample and has had a very low dropout rate.

Over the course of the study, participants have completed assessments evaluating their developmental milestones in childhood; their traits, behaviors, and aspirations through adolescence; and their attainments and outcomes in adulthood.

Belsky and colleagues matched the genotypes of Dunedin Study participants with the genome-wide associations with educational attainment that had been reported previously.

The results revealed that genetic links with educational attainment predict outcomes that go well beyond the completion of schooling, as Belsky and colleagues hypothesized.

The researchers found that individuals with higher polygenic scores were more likely to move away from home in search of professional opportunities, they built more successful careers, they were better at managing their money, and they had spouses with higher levels of education and greater earnings.

Intelligence partly accounted for the association between genes and life outcomes, but so did other psychological characteristics, including self-control and interpersonal skills (e.g., being friendly).

But there were some important life outcomes that the polygenic scores did not predict. When the researchers looked at whether polygenic score predicted children’s physical health – measured from repeated clinical exams across childhood – they found no evidence of an association.

Together, the findings provide glimpses into how genes may ultimately shape our lives over time, but the researchers emphasize that the associations between polygenic score and life outcomes are small:

“We can make only very weak predictions about how far a child can go in life based on their genes,” Belsky explains.

The data currently available do not provide sufficient information to guide educational interventions or other real-world applications; nonetheless, they raise provocative questions that ought to be discussed among scientists, policymakers, and the members of the public.

“‘Precision education’ or other tailoring of environments to children’s genomes is not possible with the data we have in hand today, but our findings suggest that such data may someday become available,” Belsky says. “It is vital to have the conversation about what that might mean and how we will deal with it before it happens.”

The research was supported by the US National Institute on Aging (NIH AG032282; AG048895; T32 AG000029; P30 AG028716-08), the UK Medical Research Council (MRC MR/K00381X), and the New Zealand Health Research Council and Ministry of Business, Innovation, and Employment, which supports the Dunedin Multidisciplinary Health and Development Research Unit. Dan Belsky is a Fellow of the Jacobs Foundation.