We’re often told to “forgive and forget” the wrongs that we suffer — it turns out that there may be some scientific truth behind the common saying. A study from researchers at the University of St. Andrews in Scotland shows that the details of a transgression are more susceptible to forgetting when that transgression has been forgiven.

“It is well established that learning to forgive others can have positive benefits for an individual’s physical and mental health,” says Saima Noreen, lead author of the study. “The ability to forget upsetting memories may provide an effective coping strategy that enables people to move on with their lives.” 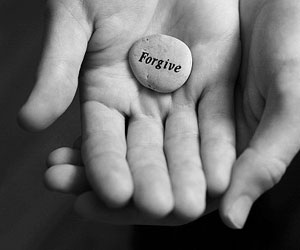 From the perspective of cognitive science, overcoming strong negative emotions toward the person who did us wrong and quashing impulses for retribution or vengeance — processes that are critical to forgiveness — may be seen as a function of executive control.

And research suggests that this executive control is also involved in our ability to forget something when we’re motivated to forget it.

Noreen decided to examine whether this same cognitive mechanism might form a link between forgiveness and forgetting.

The study, conducted with colleagues Malcolm MacLeod and Raynette Bierman, involved participants reading 40 scenarios that contained hypothetical wrongdoings, including infidelity, slander, and theft. They were asked to evaluate the transgression and say whether, as the victim, they would forgive the misdeed.

This procedure, often used in memory research, essentially trains people to forget specific information or details. The researchers wanted to see whether forgiveness might affect the forgetting process.

In contrast, participants showed no forgetting for scenarios they had not forgiven, even when they had been told to forget them.

Together, these findings suggest that forgiveness may facilitate intentional forgetting by helping individuals to suppress details about the transgressions perpetrated against them.

So, while true forgiveness may be difficult to accomplish, the findings suggest that once the transgression has been forgiven forgetting may become easier as a result.

“This research is only coming into fruition, and it’s likely that the relationship between forgiveness and forgetting is bi-directional and far more complex over longer periods of time,” Noreen says. “We hope that, in time, new fields of enquiry may combine forgetting- and forgiveness-based interventions that might, in turn, give rise to powerful therapeutic tools that will enable people to “forgive and forget” more effectively.”