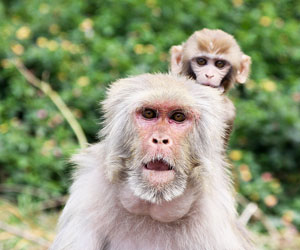 Are humans the only animal that knows what they don’t know? A study by researchers at Yale and Harvard shows that rhesus monkeys also spontaneously recognize when they are ignorant and need to seek out more information.

“Metacognition— the ability to think about our own thoughts— has long been considered a hallmark of being human,” said Laurie Santos, Yale psychological scientist and senior author of the study. “We all know the difference between feeling like we know something for sure and feeling like we’re not all that certain. We know when we need to Google something.”

But do other animals recognize their own uncertainty?  Previous studies have shown that animals can recognize when they are uncertain, but these animals were typically exposed to the experimental problem over an extended period of time.

“But that is different from what we see in humans,” said Alexandra Rosati, an evolutionary biologist at Harvard and lead author of the study.  “We wanted to know if monkeys could engage in metacognition on the spot when confronted with a brand-new problem.”

Rosati and Santos devised a clever experiment to test whether free-ranging rhesus monkeys spontaneously know when they need more information.  They gave a total of 120 monkeys a chance to search for food that was placed into a structure.

In some cases, the structure was composed two cylinders arranged in a V-shape.  When monkeys were able to see which cylinder the food went into, they quickly ran to that spot to retrieve the food.   But when monkeys weren’t sure which cylinder contained the food, they instead ran to the junction of the two cylinders so that they could check the contents of both before they committed to searching one container.

When they were presented with a single tube that had no center opening, they rarely approached the center, even when they had not seen which side of the cylinder the food went into. This suggests that the monkeys were aware of the fact that no additional information could be gained by looking at the center of the cylinder.

Together, these results show that the monkeys spontaneously used information about their own knowledge states when figuring out how to search for the food.

“Our human understanding of when we need more information is such a ubiquitous behavior that we never give it a thought,” Santos said. “When navigating a new city, we know the difference between knowing where we’re going and realizing we need a map. When considering grabbing an umbrella, we already know it’s raining or that we need to look outside.  Our results hint monkeys have that same feeling of certainty and uncertainty themselves and it guides their behavior.”

This research was supported by the National Institute of Mental Health (R01MH096875) and by National Center for Research Resources Grant CM-5-P40RR003640-13, awarded to the Caribbean Primate Research Center and the University of Puerto Rico-Medical Sciences Campus. L. R. Santos was supported by a James S. McDonnell Foundation Award (220020242) and by
Yale University.

News > Latest Research News > Do Monkeys Know When They Don’t Know Something?