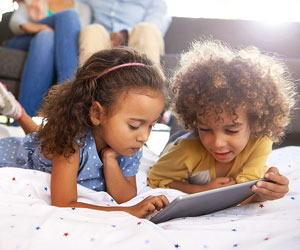 The findings show that 5-year-old children adopted a turn-taking strategy more effectively than their younger counterparts, suggesting that the skill emerges as children’s cognitive abilities mature.

“Although chimpanzees and young children may be able to engage in reciprocal interactions that are driven by past events – ‘She was nice to me, so I will be nice to her now’ – this study shows that they are not able of prospective turn-taking and understanding the long-term benefits of taking turns,” says lead researcher Alicia Melis of Warwick Business School in the UK. “This suggests that more complex planning and reasoning skills are necessary for turn-taking.”

The ability to take turns to ensure future benefits is a fundamental and strategic social behavior that expands the range of cooperative behaviors humans exhibit. According to Melis, it allows individuals to cooperate even when they have conflicting interests or would otherwise compete with each other, such as when parents take turns picking children up at school or when drivers take turns merging into a single lane on the highway.

To investigate children’s and chimpanzees’ turn-taking abilities, Melis and colleagues devised an experiment involving rewards placed on specially designed trays. Each pair of participants had to work together to pull the trays so that a reward – stickers for children, fruit for chimpanzees – would be reachable. Importantly, pulling one tray resulted in losing the reward on the other tray.

The data showed that although some of the younger pairs eventually developed a turn-taking strategy, it took them awhile to do so – some of the 3.5 year-olds never resolved their conflict of interest.

“Although young children are encouraged to take turns across many different situations, including in interactions with adults and when sharing resources with other children, our findings show that it was only from age 5 when the children were able to spontaneously take turns to solve a conflict of interests,” Melis explains.

The chimpanzee pairs had a success rate similar to that of the younger children, accessing a reward about 64% of the time. All of the chimpanzee pairs were able to cooperate for at least several trials in a row, but none of the pairs adopted a consistent turn-taking strategy.

These findings suggest that foregoing an immediate benefit to accommodate the desires of another individual is a cooperative strategy that may develop over time in humans but not in chimpanzees.

“The fact that these skills in humans do not develop until age 5 suggests that turn taking requires sophisticated cognitive skills that may be lacking in chimpanzees,” the researchers write in conclusion.

According to Melis, future work investigating the specific cognitive components underlying turn-taking can tease apart the relative importance of skills like the ability to think ahead and imagine future interactions, the ability to plan, and the ability to reason about fairness and mutual gain.

Co-authors on the research include Patricia Grocke and Michael Tomasello of the Max Planck Institute for Evolutionary Anthropology in Germany and Josefine Kalbitz of Georg-August-Universität Göttingen in Germany.