“Our findings show that 13-month-olds can make sense of social situations using their understanding about others’ minds and social evaluation skills,” says psychological scientists and study authors You-jung Choi and Yuyan Luo of the University of Missouri. “The research is innovative in that we show that infants are able to construe social situations from different participants’ perspectives.” 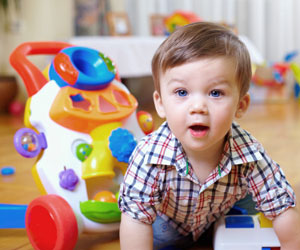 Graduate student You-jung Choi and senior co-author Yuyan Luo were interested in how information, or lack thereof, can affect our social interactions with others.

Imagine, for example, that a friend of yours does something bad — will you treat that person differently after finding out about the friend’s transgression? And what would happen if you never found out?

“For adults, the answers to these questions are probably complicated, depending on various factors such as the nature of the friendship and both parties’ personalities,” say Choi and Luo. “We wondered whether infants could handle complex social interactions such as these.”

The researchers brought 48 infants, who were around 1 year old, into the lab for their experiment. The infant sat on his or her parent’s lap, facing a little stage where hand puppets would appear. Two puppets (A and B) appeared on stage and clapped their hands or hopped around together, allowing the infants to familiarize themselves with the characters and learn that A and B were friendly with each other.

Choi and Luo wanted to know how the infants would respond to subsequent interactions between A and B, given what they had seen. Infants can’t tell us what they expect to happen, so researchers have turned to looking time as a way of getting at infants’ expectations. Things that are normal or expected are relatively boring and infants quickly look away; things that are unusual or unexpected, however, are interesting and infants tend to spend more time looking at the novel thing.

When the researchers analyzed the looking time data, they found that the infants responded to outcomes in the three scenarios differently, in accordance with the social implications of each scenario.

So, if A was a witness to the deliberate hit, the infants seemed to expect A to shun B. They spent more time looking at the puppets when A was “friendly” with B after the hit (wiggling and swaying together) than when A ignored B, suggesting that the friendly interaction was an unexpected turn of events.

“This to us indicates infants have strong feelings about how people should deal with a character who hits others: even his or her acquaintance or ‘friend’ should do something about it,” say Choi and Luo.

If, however, A wasn’t around to see the hit occur, the infants looked longer when A shunned B than when A was friendly to B, indicating that the infants were able to keep track of what A knew and didn’t know and use that information to make inferences about A’s behavior.

When the hit was an accident, the infants spent about the same time looking at the puppets in the two outcomes — they seemed to respond to the friendly outcome and unfriendly outcome as equally reasonable.

According to Choi and Luo, these results suggest that young children are developing skills than enable them to assess social situations and make relevant social judgments earlier than many would assume.

The researchers plan on continuing this research, investigating whether infants have expectations about how the victim in a scenario should be treated and whether they can also take more positive, helping behavior into account in their social evaluations.