News > Minds on the Road > How Stereotypes Can Threaten Your Driving 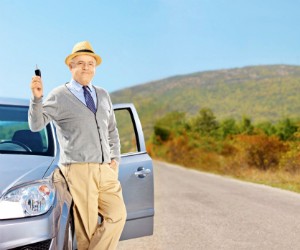 In 1995, Stanford University psychologists Claude Steele and Joshua Aronson completed a series of groundbreaking experiments showing that evoking negative stereotypes about a group can actually undermine the performance of people in that group — a phenomenon known as stereotype threat.

Older drivers are often portrayed negatively in popular media and in the news as less safe and competent than their younger counterparts. However, research actually shows that drivers 65 and older are among the safest drivers on the road. For example, the Insurance Institute for Traffic Safety finds that seniors are far less likely than younger drivers to engage in dangerous activities, such as drunk driving or texting, behind the wheel.

A team of psychological scientists led by Ann Lambert of the University of Utah wanted to know whether exposure to negative age-related stereotypes could have the unintended effect of harming older people’s driving performance.

Lambert and colleagues suspected that stereotype threat interferes with performance by competing for cognitive resources related to working memory capacity (WMC) — the ability to maintain task goals in mind in the face of distraction. That is, when people feel anxious and stressed about their performance, they may have fewer cognitive resources available for other processes. When it comes to driving, this means that people who are anxiously self-monitoring their performance may have less working memory capacity available for the processes necessary for safe driving.

For the study, 39 volunteers ranging in age from 62 to 83 years old came to the University of Utah campus to take part in a driving simulator study. Twenty participants were male and 19 were female.

Working memory capacity was assessed by asking each participant to complete a very challenging memory task. Participants had to attempt to solve an equation and then memorize a word. At the end of each set of problems, they were asked to recall words in the correct serial order. All participants met a minimum math accuracy criterion of 80%.

During the experimental drive, participants were instructed to follow a lead vehicle at a specific safe distance, braking whenever this lead vehicle braked, and to exit at the city of Murray, which required a lane change.

As predicted, evoking stereotype threat resulted in significant driving impairments in drivers already low in working memory capacity. Their driving showed the same pattern of distraction that is typical of people attempting to talk on the phone while driving: They had slower reaction times on the brakes and had difficulty maintaining the correct following distance compared to the control group.

Ultimately, the researchers explain, the local laws and policies designed to increase awareness of the challenges of driving and aging may be undermining seniors’ safety.

“Our findings present an urgent safety concern,” the Lambert and colleagues write. “Ironically, the reevaluation process and even the media coverage of these policies may unintentionally elicit stereotype threat effects in driving, akin to those reported here, ultimately jeopardizing public safety.”

News > Minds on the Road > How Stereotypes Can Threaten Your Driving

Most sterio types of drivers are basically not true. Most of the fault of drivers of any age, any race, and any demographic, will lie with the education and law enforcement of that area.
Education standards in driver training and driver rehabilitation are of sub par standard no matter where you go. A lot more resources and funding has to go into both of these areas. The retesting of ALL DRIVERS; every five years would also go along way to ridding our roads of problematic behaviour.