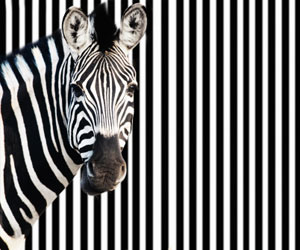 During World War I, a zoologist proposed that British warships could use the “disruptive” camouflage of zebras and leopards to confuse enemy ships. Instead of attempting to hide from view, the idea was that “razzle dazzle” patterns would make it difficult for the enemy to accurately gauge a ship’s position — misleading rather than hiding.

Although both American and British warships were painted with psychedelic zebra-stripe patterns based on this theory, it was never conclusively shown that the razzle dazzle stripes helped the ships elude enemy fire.

“[C]omplex high contrast patterns were used on ships during both World Wars with the aim of disguising properties such as the direction, size, shape, range and speed of the moving target,” the researchers write. “This so-called dazzle coloration was often a combination of different patterns including stripes (vertical, horizontal and diagonal), checks, zigzags and some less regular shapes.”

In a recent study published in PLoS ONE, a team of researchers from the CamoLab at the University of Bristol concluded that this style of nature-inspired camouflage really can dazzle our senses, ultimately skewing our perceptions of an object’s speed.

“Although navies are generally no longer reliant on the human visual system to detect and target other vessels, there are other scenarios where a dazzle strategy may still provide a useful benefit. For instance, moving vehicles are vulnerable to handheld weapons fired from short ranges. Here, disguising speed could make the difference between a near miss and a direct hit,” lead research Joanna Hall and colleagues explain.

Across seven experiments, participants were shown a target rectangle, roughly corresponding to the size of a Land Rover viewed from a distance of 70 meters, “a typical distance between a rocket propelled grenade launcher and its target.” Each of these test targets was wholly or partially covered by a patch of dazzle camouflage: a pattern of flowing stripes was superimposed over the target. Across different conditions, the speed of the pattern undulating across the object was varied as well as the speed of the target as it moved across a background.

The researchers also investigated different colors, contrast patterns, and whether working under stressful conditions — in this case, an oxygen deprivation challenge — would influence speed perception.

“We have shown that this dynamic texture can successfully change the perceived speed of a target, either increasing or decreasing the speed, depending on the direction of the pattern relative to the direction of the target motion,” the researchers write. ”Manipulations of the size and position of the texture patch showed that the visual system preferentially attends to the trailing edges of moving objects.”

Based on these findings, dazzle camouflage could be an option for speedsters looking to soup up their custom paint jobs. Another practical application for this research is to help provide cover for military vehicles.

“Further research would be required for the dynamic dazzle to be scaled up for use on an object of a similar size to a Land Rover but our experiments provide preliminary evidence that this is a predictable and robust effect which is unaffected by the observer’s stress level,” Hall said in a press release.

What about the opposite? Are there design elements on vehicles (including pedestrians and bicycles) that would make it EASIER to detect their motion, direction, speed so as to avoid collision? Are there designs (eg., pattern of bus windows, mono brake-lights, chrome trim) that contribute to distortion?