News > Minds on the Road > Bicyclists Beware: The Psychology of Car-Bike Crash Risks

With bike-sharing programs in more than 500 cities worldwide accounting for a combined fleet of over 500,000 bicycles, cars are increasingly sharing urban streets with bicycles. 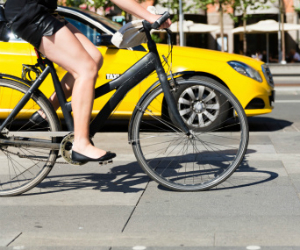 When crashes between bikes and cars occur they are often particularly dangerous for the cyclist. In 2012 alone, 722 bicyclists were killed in crashes with motor vehicles– a 6 percent increase from 2011, according to US government statistics.

To better understand the cause of crashes between cars and bikes, psychological scientists Nadine Chaurand and Patricia Delhomme of The French Institute of Science and Technology for Transport looked at differences in how cyclists and drivers perceive traffic risks.

Using an online survey, Chaurand and Delhomme asked 336 cyclists and 92 drivers to rate how likely various car-bike traffic scenarios were to cause a crash. The scenarios also included interactions between only cars, only bikes, and a car and a bike. In each of the scenarios, one of the parties was committing a traffic violation, such as tailgating or going through a red light.

The researchers found that drivers and cyclists had several commonalities in their perceptions of risk. For example, variables previously shown to impact risk perception for drivers–such as driving experience or perceived driving skill–had an effect on cyclists as well. Both cyclists and drivers also perceived less risk when they imagined themselves, as opposed to another vehicle, as the one making a traffic violation.

The study also found key differences in risk perception that could have important implications for improving road safety for both cyclists and drivers.

News > Minds on the Road > Bicyclists Beware: The Psychology of Car-Bike Crash Risks

I am pretty careful around cyclists on the road as I used to be one. What really bothers me however are the number of cyclists using the footpath. This puts pedestrians at risk. Also the share use paths are bad news for pedestrians as well. I never ever rode on the footpath and think throwing cyclists and vulnerable pedestrians together is bad news. It is an epidemic in my home town and I have been knocked down twice. Footpath and walking trails should not be compromised like this. There are lots of people who walk that cannot afford a fall

Or to put that another way, if the car driver doesn’t see themselves getting injured in a potential crash, they don’t do so much to avoid it.