Whether you’re a driver, a pedestrian, or a cyclist, chances are you’ve had at least a few first-hand experiences with someone with an anger problem behind the wheel. 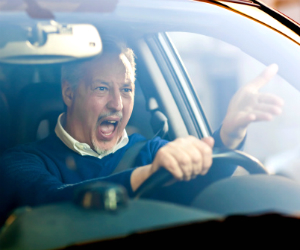 Aggressive driving, which includes deliberately driving unsafely in order to punish or get even with someone, is a major road hazard. A study from the AAA Foundation looking at more than 10,000 road rage incidents found that altercations between angry drivers resulted in at least 218 murders and another 12,610 injury cases over the course of seven years.

When asked what set off their anger, drivers in the study often cited trivial reasons for why they became violent: “She wouldn’t let me pass,” “They kept tailgating me,” or, as this driver accused of attempted murder explained, “He practically ran me off the road – what was I supposed to do?”

Is someone who screams profanity out the window or incessantly honks their horn over a parking spot the type of person that tends to fly into a rage in other contexts?

To find out whether angry drivers are generally angry people, psychological scientist David Herrero-Fernández of the University of Deusto in Spain had 198 participants fill out self-report assessments on how often they experience anger in general, as well as how they experience anger behind the wheel.

Herrero-Fernández also had participants fill out measures identifying how they express anger. While some of us manage to remain calm and polite even when we’re fuming on the inside, others express their anger verbally by shouting and swearing or even escalating a conflict into a physical brawl.

The results, published in the journal Transportation Research Part F: Traffic Psychology and Behaviour, indicate that while the two types of anger are linked, an anger problem behind the wheel doesn’t necessarily extend to someone’s general disposition. Just because someone tends to lose their temper over perceived slights on the road doesn’t mean they’ll react the same way if you cut in front of them in line at the check-out aisle.

“The correlation was positive, significant and of moderate strength, which suggests that general anger and driving anger, although associated, are two different traits,” writes Herrero-Fernández.

The notion that ‘‘man drives as he lives’’ isn’t warranted by these findings, says Herrero-Fernández – a more appropriate conclusion might be: ‘‘Man needs different stimulation to get angry on and off the road. However, when he experiences anger, he will express it the same way in any context.’’

Because the study relied on self-reported anger and driving behavior, Herrero-Fernández suggests that future research could employ behavioral studies to see how people handle actually handle anger on the road. Further studies might also examine additional variables that could affect a driver’s proclivity towards anger, such as years of driving experience and distance driven per year.

News > Minds on the Road > Are Angry People Also Angry Drivers? Not Necessarily

I’m curious if there was an asymmetry in the relationship between angry driving and angry behavior more generally. I would predict that generally angry people are also angry behind the wheel, whereas the converse is not true. It may be that people feel safe to express themselves when encased in a vehicle, etc.