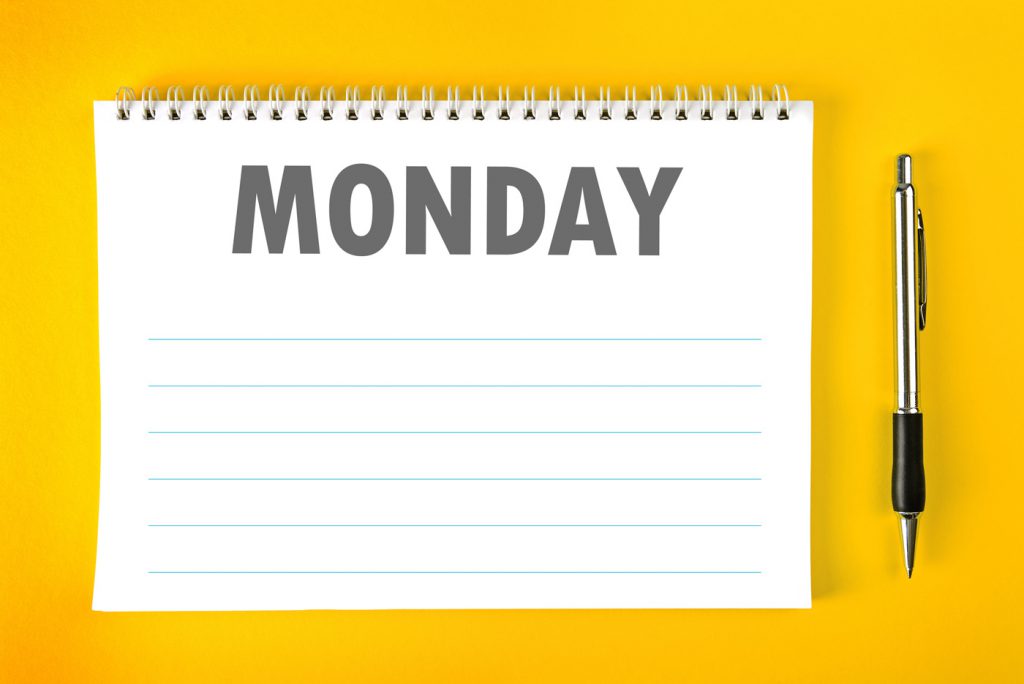 Maybe you’ve been talking about taking that professional development class for months now, or you’ve really been meaning to update your retirement savings plan. It would really help you manage your stress if only you could get yourself to go to the gym. Setting goals is easy, but actually accomplishing them tends to be a lot harder.

Research in Psychological Science suggests that we may be more likely to actually follow through with our professional goals if we start on a Monday rather than a Thursday.

People tend to attribute negative traits and failures to their past selves while maintaining a positive image of their current selves. Dates that stand out as being more meaningful—such as the start of a new week or financial quarter, a birthday, or a holiday— signal the start of a new, distinct time period. These “temporal landmarks” make it easier for people to mentally separate from their past imperfections and failures.

Essentially, people are more empowered and motivated to pursue their goals when they feel like their past failures are behind them and their future success is ahead of them — a phenomenon the researchers dub “the fresh start effect.”

In one study, 165 participants completed a short online survey. First, they were instructed to describe a personal goal that they were planning on pursuing in the near future. Next, they received an offer of receiving a customized email to help remind them of their goal and how to accomplish it.

Participants could choose which date they wanted to receive their helpful reminder, ranging from March 18 (Tuesday) to March 24 (Monday).

Framing March 20th as a temporal landmark, as opposed to a regular Thursday, had a surprisingly large impact. Participants in the fresh start condition chose March 20th as their helpful reminder date at 3.5 times the rate as those in the control condition (26% vs. 7% respectively).

A survey of a separate group of 141 participants confirmed that most people really do think of the first day of spring as more of a new beginning compared to the third Thursday in March.

And data reported by Dai, Milkman, and Riis in the journal Management Science suggest that the fresh start effect may have a serious impact on people’s real world behavior.

The researchers looked at student gym-going behavior at a university fitness center. Data collected from the gym’s automatic card readers revealed that gym visits increased dramatically around temporal landmarks. Students were much more likely to exercise at the beginning of a new week, at the beginning of the semester, or right after a birthday.

Organizations trying to jump start employee motivation for long-term goals may want to consider timing. Simply waiting until after a holiday or the first of the month has the potential to improve people’s motivation to pursue professional development, new projects, or even investing in their retirement savings.

“The abundance of fresh start opportunities throughout the year offers repeated chances for people to attempt positive self-change, so even if they initially fail, they may subsequently succeed,” the authors conclude.

Thank you for the great article.

It’s good to know that research backs up the fact that a specific milestone that marks a fresh start (like the beginning of spring) increases your chances to follow through with your goals.

I consistently restart my diet and exercise regime on a Monday after falling off it. I also get my mindmap organised and sent off to my writing group each fortnight on a Monday if I didn’t complete it the day before. It is a day I like to start of the week properly in all ways as I seems to make me feel as if it will help the week go better.