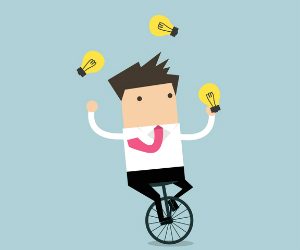 After the success of his movie American Graffiti, George Lucas pitched an idea for a little sci-fi flick called “The Star Wars” to several major film studios; United Artists, Universal Pictures, and Disney all passed on the ambitious project. Star Wars, which was produced for $11 million dollars in 1977, went on to become one of the biggest box office successes in the history of film. Adjusted for inflation, the Star Wars films have raked in over $21 billion dollars—a fact that has probably haunted all the studio executives who initially passed on the project.

“Betting on the most promising new ideas is key to creativity and innovation in organizations, but predicting the success of novel ideas can be difficult,” explains Stanford psychological scientist Justin M. Berg. “To select the best ideas, creators and managers must excel at ‘creative forecasting’—i.e., predicting the outcomes of new ideas.”

So who’s better at predicting the next big thing, the creators behind a new idea, or the “suits” typically tasked with evaluating whether new ideas ever make it to market? To find out whether managers or creators are better at getting inside the heads of an audience, Berg teamed up with an unusual group of participants: circus performers.

The results of the new study, published in Administrative Science Quarterly, suggest that creators are better at evaluating creativity than their bosses—but only when they’re evaluating someone else’s idea.

“These studies suggest that creators are bad at forecasting the success of their own ideas, but better than managers at forecasting about others’ ideas,” Berg writes. “Whereas managers and laypeople may both rely too heavily on conventional models of success, the additional time creators spend on divergent thinking may help them recognize novel ways in which ideas may succeed.”

For the first experiment, Berg collaborated with a former Cirque du Soleil circus performer on an international contest inviting circus creators to submit online videos of their acts. Over 300 circus professionals from 43 different countries participated, including 177 creative performers, 120 managers, and 42 people who had both creative and managerial roles. Creators who submitted videos—as well as an additional sample of circus professionals and 150 laypeople—were then asked to forecast which of these acts would be most appealing to an audience.

Participants were asked to rate a sample of 10 videos, randomly selected from a pool of 100 videos chosen in a pretest. After watching each video, participants made forecasts on what percentage of the general public (0-100%) would like the video, would share the video, and would go see the performance.

Another online pool of 13,248 of “audience members” from the general public completed an audience survey; each participant watched and rated their enjoyment of one randomly selected video using a 7-point scale. Participants were then given the opportunity to share the video using Facebook, Twitter, Google+, or email. As an estimate of the potential financial success of an act, audience members were told that they earned a small cash bonus and could give as much of this bonus as they would like to support the work of the performers in the video they had just watched.

Creators were more accurate than both managers and laypeople in successfully forecasting audience reactions, but managers were no better at forecasting than the general public.Those circus professionals who had both managerial and creative duties scored in between the creators and the managers when it came to the accuracy of their predictions. This suggests that a job focused on evaluating ideas may encourage a bias favoring conservative ideas over novel ones.

“The results from these studies suggest that by having managers specialize in selection, the role may (ironically) hinder managers’ ability to select the best ideas,” Berg concludes. “This implies that as individuals gain knowledge in their domains, their ability to accurately forecast the success of new ideas is likely to decrease, or at best remain the same.”

A 2011 study published in Psychological Science found that there is a hidden bias against creative ideas. Although people overwhelmingly report positive associations with creativity, Jennifer Mueller (University of Pennsylvania) and colleagues demonstrated that when a decision is uncertain, “this bias against creativity interfered with participants’ ability to recognize a creative idea.”

News > Minds at Work > Who’s the Better Judge of a Good Idea: You or Your Boss?