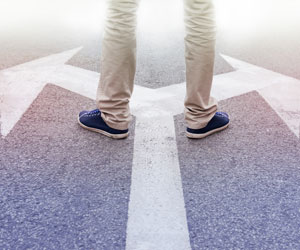 Should I sign that contract? Should I fire that lazy employee? Should I eat lunch at my desk or go out?

Business professionals face a daily dose of decisions like these — some that we can change, others that are irreversible.  While it may seem safer to make choices we can later revise, a small body of research suggests that people tend to be more satisfied after making unalterable decisions rather than those they can undo.  This partly stems from humans’ tendency, demonstrated in psychological research, to overestimate the regret they’ll feel over their decisions.

In one experiment several years ago, for example, researchers had participants take part in a two-person negotiation for money, which enabled them to observe participants’ negotiation style and measure how much regret they would feel if their tactics failed.  The scientists found that participants across the board tended to overestimate their post-negotiation regret and disappointment in relation to rejected transactions.

More recently, psychological scientist Rebecca I. Shiner wanted to explore how this pattern applies to people with a “maximizing” decision-making style – that is, people who search extensively for the best possible option. Researchers have found tendencies among maximizers toward regret, depression, anxiety, and neuroticism. They stand in contrast with “satisficers,” whose decisions are based on a more cursory search for optimal choices.

Shiner theorized that maximizers are more comfortable with reversible decisions than are satisficers. To demonstrate that scientifically, she presented a group of students with a questionnaire designed to assess their decision-making style. Questions included “When I watch TV, I channel surf, often scanning through the available options even while attempting to watch one program” and “I never settle for second best.” Based on these answers, Shiner categorized each student as a maximizer or a satisficer.

Then, an experimenter presented the students with nine posters showing paintings by famous artists.  The students were asked to rank the posters in order of their personal preference.  Next, the experimenter told the participants that there were extra copies of the third and fourth ranked posters and asked them which of the two they’d like to take home.  In one condition, participants were told they could change their minds about their selection and switch posters at any time in the next month. In the other condition, the experimenter told the students their choice of poster was final.

Then, all the participants were invited to re-rank the posters in order of preference and complete a questionnaire that assessed their levels of satisfaction or regret over their previous choice of which poster to take home.  As expected, the satisficers reported more satisfaction with their poster choices when the decision was irreversible rather than alterable, while maximizers were happier when the decision was reversible rather than final.

In a follow-up experiment, Shiner recruited another group of students and gave them a similar test to measure their decision-making styles. She then presented them with descriptions of the earlier study involving the art posters, and asked the participants which of the two versions of the study they preferred—the reversible or irreversible condition. Most of the participants overall, and especially the maximizers, preferred the reversible version. But interestingly, Shiner found that some of the most extreme maximizers favored final decisions as a way to cope with anxiety over decision-making.

Shiner suggests that future research focus on maximizing/satisficing differences across other decision-making situations, and whether people’s sentiments about a decision hold over the long term or change over time.

Shiner, R. (2015). Maximizers, satisficers, and their satisfaction with an preferences for reversible versus irreversible decisions. Social Psychology and Personality Science, 6(8) 896-903.

News > Minds at Work > When Decisions Satisfy, and When They Upset