News > Minds at Work > The Slippery-Slope Effect: Minor Misdeeds Lead to Major Ones 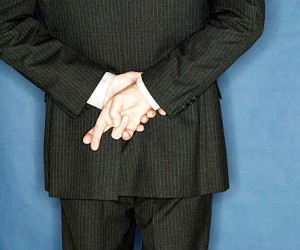 “Well, you know what happens is, it starts out with you taking a little bit, maybe a few hundred, a few thousand,” notorious fraudster Bernie Madoff told Vanity Fair after stealing $18 billion from investors. “You get comfortable with that, and before you know it, it snowballs into something big.”

A new study finds that getting away with minor infractions ends up making it easier for people to justify bigger, more serious ethical violations. Over time, small ethical transgressions–like stealing pens from work–can put employees on the “slippery slope” of increasingly bad behavior.

Across four experiments, psychological scientists David Welsh (University of Washington), Lisa Ordóñez (University of Arizona), Deirdre Snyder (Providence College), and Michael Christian (University of North Carolina at Chapel Hill), found that people were more likely to cheat when the stakes were small and misdeeds were easier to rationalize.

“Because individuals more readily justify small indiscretions as opposed to major ethical, moral disengagement is likely to occur when unethical behavior develops gradually over time rather than abruptly,” Welsh and colleagues write. “We call this the slippery-slope effect.”

In one experiment, 73 college students came to the lab and were given a series of math problems to solve. For each correct answer, the student could earn a small cash prize. Each student was assigned to one of three conditions, depending on how much they could earn for each round of problem sets.

After each round, participants were given an answer sheet so they could check their own work and pay themselves in cash from an envelope provided by the researchers. What the participants didn’t know was that a unique coded number appeared on both the worksheets and answers, enabling the two to be linked after participants had disposed of their materials and left the room. This allowed the researchers to identify any cheating that might have taken place.

As expected, the biggest cheaters were those in the gradual-change condition.

Encountering a slippery-slope situation, where opportunities to cheat started off small and gradually increased in scope, led people to cheat at double the rate compared to the other conditions.

“Contrary to the argument of some researchers that employees are prone to committing only minor indiscretions, our results suggest that small indiscretions may snowball into major violations over time if left unchecked,” the researchers write in the Journal of Applied Psychology.

To help prevent unethical behavior at work, the researchers suggest that managers emphasize strong ethical policies and address minor ethical transgressions before they escalate. In one experiment, the research team found they could even successfully prevent cheating by having participants think about risk and potential negative outcomes just before an opportunity to cheat.

“The ideal is for employees to recognize when they’ve committed a minor transgression and check themselves,” says Christian. “We hope that our research, by drawing attention to this effect, will increase vigilance by individual business leaders.”

News > Minds at Work > The Slippery-Slope Effect: Minor Misdeeds Lead to Major Ones