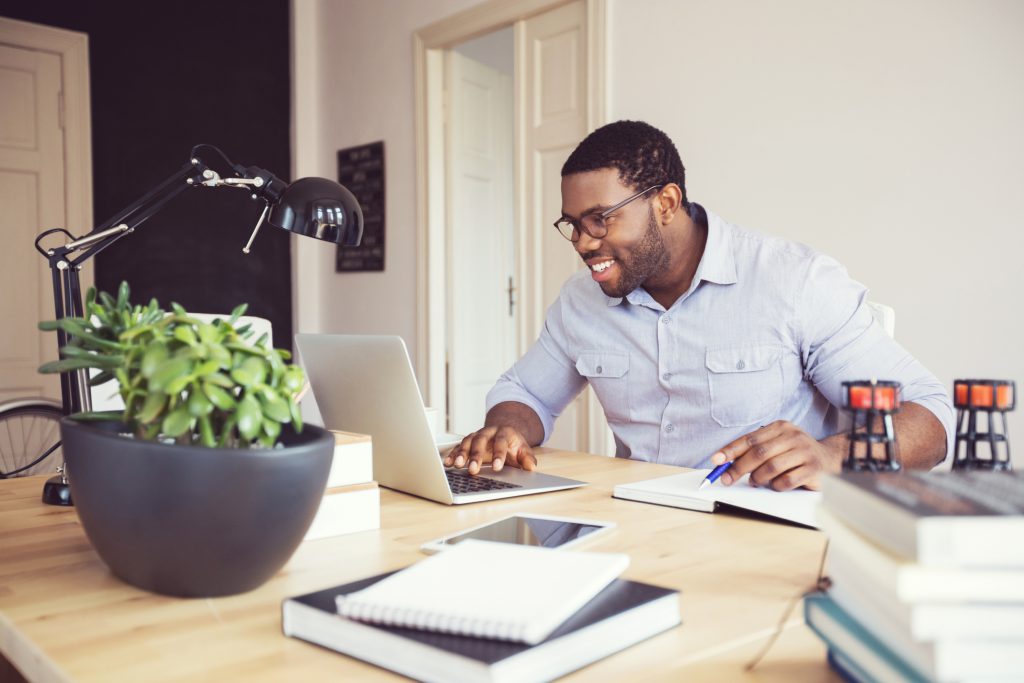 Telecommuting seems to have an inherent tension to it. The work-from-home setup is easier and low-stress for workers, and allows for flexible working hours and family management. When workers are telecommuting, however, managers sacrifice the ability to closely supervise or consult employees.

But management researchers Timothy Golden of Rensselaer Polytechnic Institute and Ravi Gajendran of Florida International University have found that, among a sample of 273 teleworkers and their managers, telecommuting is associated with improvements in job performance. In a February 2018 article, the experimenters describe a study that matched manager job performance assessments to workers, who rated their percentage of time telecommuting and their job characteristics.

Golden and Gajendran predicted that certain aspects of a job would influence the relationship between job performance and teleworking, so they took a closer look at four job factors. Two of these were knowledge-related factors: job complexity and problem solving. Two were social characteristics of a job: interdependence and social support. The authors found that workers who teleworked more received higher job-performance ratings from their managers if the job was complex, required minimal interpersonal interaction, or if the worker received little social support at work.  Jobs that required lots of problem solving were neither helped nor hurt by telecommuting.

This latest research adds to a body of studies that catalogues the pros and cons of telecommuting, including a 2015 article published in ­Psychological Science in the Public Interest. Authors Tammy Allen of the University of South Florida, Golden, and Kristen Shockley of Baruch College, City University of New York write, “telecommuting is associated with many benefits for employees, such as increased job satisfaction, organizational commitment, and job performance and lower work stress and exhaustion.” The authors include a caveat that telecommuting is not for everyone in every job. “Those who work primarily out of the office may face isolation from, and reduced levels of knowledge sharing with, colleagues. Working from home may also blur family-work boundaries and lead to increased amounts of work during “non-work” hours.”

This last point is backed up by a 2013 Gallup poll which found that telecommuters reported working an average of four hours more per week than non-telecommuters.

Golden and Gajendran cite previous research that found conflicting views on working from home between workers and their bosses: Workers see it as a work-family benefit, but bosses assume it costs the company in performance, control, and more responsibilities on office-based coworkers.

“When managers view telecommuting this way, they are likely to make negative attributions about telecommuters and their level of commitment and dedication to their jobs,” write the authors.

On the contrary, their own research found “there are significant performance upsides for many employees with little downsides for the remainder — at worst, the extent of telecommuting neither helps nor harms performance.”

A majority of past studies on telecommuting have asked fairly simple questions. Previous researchers divided workers into groups of those who telework and those who work onsite, without regarding the amount of time spent teleworking. They similarly asked simple questions about outcome, whether it is good or bad, without asking for whom telecommuting works best. Results from this kind of study have been mixed, suggesting there are other factors at play.

Golden and Gajendran’s study, for example, found that job complexity is associated with teleworking job performance. Those with complex jobs had higher job performance with more telecommuting. The researchers suggest that, for those with complex jobs, telecommuting may provide for fewer interruptions and more time for focus, noting that, “for jobs high in complexity individuals generally benefit from long periods of uninterrupted time to successfully complete their work.” It is worth noting that less complex jobs didn’t suffer from telecommuting. Frequent teleworkers had similar performance ratings to infrequent teleworkers and full-time office workers.

Similarly, those workers with low interdependence had higher job performance with more telecommuting. These workers weren’t as dependent on others to complete their tasks, so a benefit from telecommuting makes intuitive sense.

An effect that defied the experimenters’ predictions was the superior performance among teleworkers who had low social support at their jobs. To explain the results, the researchers hypothesized that low social support may suggest a toxic work environment, and that the autonomy gained from working at home may contribute to job performance or general well-being.

Those with high levels of required problem solving showed no changes with increased telecommuting. The researchers explain the results by suggesting that, “effective problem solving relies less on where employees work and more on their intrinsic motivation, expertise, and creative ability.”

These results, the authors suggest, should allay some of the fears that employers have about teleworking employees. Digital tools make it possible to keep communication largely intact and keep job performance up, even in jobs with high interdependence. While time management or distractions at home may make telework difficult for some, working from home could boost performance for many employees.

These results came from a single, large firm with input from many divisions (including marketers, programmers, accountants, and engineers). The firm had a teleworking plan for all employees, although employees took advantage of the plan to different extents. While surveying a single firm does limit the applicability of the results somewhat, the diversity of job descriptions and fairly large sample size suggests that the information should be of value to a large swath of professional-level employees.