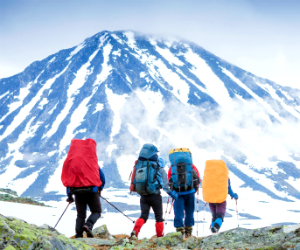 Do teams accomplish more when they enlist a strict hierarchy, or are they more effective when everyone is treated as an equal? A new study looking at 100 years of Himalayan mountain climbing expeditions helps shed light on this question, showing that hierarchy can be a mixed bag in high-stakes teams, both helping and hindering performance.

An international team of researchers from Columbia University and INSEAD in France concluded that from the board room to the surgery suite, hierarchy within high-stakes teams can help elevate team performance — but this boost can come at a potentially steep cost.

After analyzing over 5,000 Himalayan climbing teams, psychological scientists Eric M. Anicich, Roderick I. Swaab, and Adam D. Galinsky found that expeditions from countries with more hierarchical cultural values had more climbers reach the summit, but also had more climbers die along the way.

“Mountain climbing is an ideal context in which to study hierarchy,” writes Anicich and colleagues, “Teams of climbers must make decisions regarding navigation, climbing speed, and climbing route in an uncertain context. Thus, to be successful and avoid potentially fatal errors, climbers need to communicate frequently and coordinate effectively.”

When a team has a strict hierarchy, each team member’s role and responsibilities are clear; lower-ranking teammates defer to leaders, and only high-ranking individuals have the power to make decisions for the team.

This high degree of hierarchy can help improve organization and coordination while minimizing conflict between team members. However, hierarchy also has the potential to cause harm by preventing lower ranking members from actively speaking up and voicing safety concerns.

In a study published in the Proceedings of the National Academy of Sciences, the researchers asked 146 expert climbers to evaluate the success of a hypothetical climbing team about to climb one of the 26,257 foot (8,000-m) peaks in the Himalayas.

Participants read a description of the hypothetical climbing team as either having a hierarchical or egalitarian culture.They then rated the team’s level of coordination, information sharing, and safety.

The team described as being hierarchical was rated as having better team coordination, but was also rated as sharing less information between team members and being less safe than the egalitarian team.

To find out how hierarchy within teams impacted real climbers, the researchers coded and analyzed an archive of climbing data from 30,625 mountain climbers from 56 countries on 5,104 Himalayan expeditions.

The degree of hierarchy within a climbing team was determined by matching the nationality of the climbers to two global inventories for cultural egalitarianism and hierarchy. Additionally, the researchers took pains to control for factors that might have impacted the success of the expedition such as weather, climber age, and experience of the team members.

Expeditions consisting of climbers from countries whose culture strongly embraced hierarchy had more climbers reach the summit, but they also experienced more fatalities.

“Our findings show that hierarchy can simultaneously improve and undermine group performance,” says Galinsky. “The key to finding the right balance in a hierarchy is identifying the barriers that keep lower-ranking team members from voicing their perspective and providing them with opportunities for empowerment, like owning a task, or having authority over a specific initiative.”

The results suggest that cultural values about hierarchy impact the processes underlying how team members communicate and interact with each other, which can mean the difference between success and failure when individuals feel they can’t speak up.

“Whether a team is climbing a mountain in the Himalayas or tackling a high-stakes business challenge in the boardroom, it’s critical to leverage the coordination benefits of hierarchy while also embracing an environment that encourages and rewards participation and input from all levels,” said Anicich.