Although piercings and tattoos are more common than ever in America, research suggests that they may still hurt your prospects of getting a job. 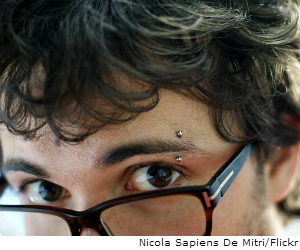 Despite the mainstream popularity of body art, many people still see facial piercings as unprofessional and unwelcome in the workplace. In a recent study, behavioral scientists James C. McElroy, James K. Summers, and Kelly Moore of Iowa State University found that even among college students, facial piercings still carry stigma that can affect whether or not someone gets hired.

“Specifically, there is still a stigma associated with tattoos and piercings in the workplace, even though numerous managers admit to having these modifications themselves,” the researchers write in the journal Organizational Behavior and Human Decision Processes.

For the study, 194 college students and 95 working adults were given the resume for a job candidate along with a description of the job they were applying for. Half of the participants were given a photo of the applicant with no facial piercings, and half were given the same photo with either a lip or eyebrow piercing Photoshopped in.

Participants then ranked the job applicants on five common personality measures, and also on their perceived competence, character, and attractiveness.

Surprisingly, the student group actually judged the job applicants much more harshly than the working adults did on nearly every personality and competence measure. This was particularly unexpected since body art is far more common among college-aged people.

Because working adults have more workplace experience to reference, it’s possible that they were better at contextualizing facial piercings in their evaluation of the candidate.

“Despite the increase in the number of people who don facial piercings, the results of this study clearly show that facial piercings engender a negative stigma,” write McElroy, Summers, and Moore.

Even though applicants with facial piercings were rated higher for extraversion, which is an advantage for many jobs, they were still rated as less suitable for both a marketing position that required extraversion and an IT position that involved little face-to-face interaction.

The researchers cautioned that while piercings seemed to carry stigma for these jobs, they may act as a signal for a good fit for other types of jobs. Future research could benefit by looking at additional factors such as age, race, and different regions of the country.

“The silver lining to this issue, however, can be quite simple—make sure that if you have facial piercings, take them out before you interview,” the researchers advise.