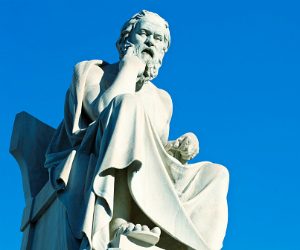 As the tutor of Alexander the Great, the Greek philosopher Aristotle knew a thing or two about the qualities that a strong leader must possess. In Nicomachean Ethics, Aristotle explains that all great leaders possess one specific trait: practical wisdom. Wisdom allows leaders to accurately size up a situation and make the best possible decisions for both themselves and others.

A recent study conducted by Igor Grossmann (University of Waterloo) and colleagues sought to answer a question about wisdom that has plagued philosophers ranging from Aristotle to Confucius: Is wisdom something we’re born with, or is it a quality that we can cultivate?

Grossmann has conducted several previous studies exploring the underlying qualities associated with wisdom. According to Grossmann and colleagues, wise reasoning is associated with “the ability to be observant, to see things within a larger context, flexibility, consideration of various opinions in a situation, self-reflection, and thoughtfulness.”

In a 2014 study published in Psychological Science, Grossmann and APS Fellow Ethan Kross (University of Michigan) found evidence that we are much wiser when it comes to making decisions about others’ social problems than our own—a habit they referred to as Solomon’s Paradox. In a series of experiments, participants were asked to imagine a situation where either a romantic partner cheated on them or a scenario where a friend’s romantic partner cheated.

After considering this conundrum, participants answered a series of questions aimed at measuring aspects of wise reasoning—such as recognizing the limits of their own knowledge, considering others’ perspectives, and searching for a compromise.

In support of Solomon’s Paradox, those who were asked to imagine someone else’s predicament scored higher on measures of wise reasoning compared to those who imagined their own partner cheating. Further experiments showed that adopting a more psychologically distant third-person perspective helps people make wiser decisions when responding to common conflicts.

“To date, research on wisdom-related thought has mainly concerned hypothetical in-lab situations or has employed single-shot trait self-assessments of personal attributes,” Grossmann and colleagues write in Social Psychological and Personality Science. “Little has been known about the nature of wisdom in everyday life.”

In this new study, Grossmann and colleagues conducted a daily diary study of wise reasoning to evaluate how people use wisdom in their everyday lives, such as handling conflicts with colleagues at work.

The researchers recruited 152 adults from communities around Berlin, Germany for the study. After completing a series of demographic questionnaires in the lab, participants were given instructions on keeping a daily diary. Every morning for 9 days, participants received an email link to their diary along with a guided prompt asking them to reconstruct specific details of a negative experience from the previous day. Next, a standardized set of questions guided participants to reflect on their feelings and reactions to the incident.

The results showed that wise reasoning varies between individuals, but also varies dramatically across different situations. The implication is that wisdom is not necessarily a fixed trait in any individual, but fluctuates depending on specific situations.

When people reported spikes of higher-than-average wise reasoning, they were more likely to report more intense positive emotions and less intense negative emotions. They were also more likely to show greater emotional complexity, a more adaptive pattern of emotion regulation (more reappraisal and less suppression), and a greater tendency to forgive. When people used wise reasoning during conflicts, they ended up having more positive, adaptive emotional reactions to negative experiences.

One implication of this, the researchers note, is that wisdom may be more common than we think. That is, the office intern may make wiser decisions than a senior supervisor depending on the circumstances.

“Results from the present article indicate that some of the central characteristics of wisdom discussed by psychological scientists, including intellectual humility, self-transcendent viewpoint, and recognition of the bigger issue at hand, have a dynamic component, understanding of which would be essential for a fuller picture on wisdom in everyday life,” the researchers conclude.