News > Minds at Work > Bonuses More Satisfying When Spent on Others, Study Suggests 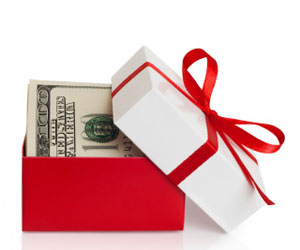 The holiday bonuses that employers began giving to their staffs at the turn of the last century have been shrinking — and even disappearing at some organizations — ever since the economy tumbled several years ago. But it turns out those end-of-the-year cash rewards may not be an effective way to motivate workers, anyway. A recent study suggests that encouraging employees to give money to others is a better morale booster than simply giving them cash to spend on themselves.

In a recent report on PLOS One, a team of psychological scientists and business scholars discussed their findings on the effectiveness of “prosocial bonuses,” such as donations to charities on an employee’s behalf.

In the first phase of a multi-level study, employees at an Australian bank were asked to complete tests designed to measure happiness and job satisfaction. Two weeks later, some of the participants were given a bonus in the form of a $25 voucher, which they could use to donate money to a charity of their choice. Another group received a voucher worth $50 to use for the same purpose. The remainder of the employees in the study received no voucher.

On a follow-up survey, the employees who received and redeemed the $50 vouchers reported more happiness and job satisfaction than did workers who redeemed the $25 vouchers or received no vouchers at all.

The scientists extended their research to professional teams. Their findings showed that when people were assigned to spend bonus money on their teammates rather than themselves, their teams performed better (e.g. generated more sales).

Unlike the first experiment, even a small prosocial bonus (less than $25) boosted team performance, presumably because participants were happier when spending the money on wine, chocolate, clothing, and other items for a colleague rather than donating to a faceless charity. Research has shown that people are happier giving face-to-face than sending money remotely.

This research suggests that the holiday bonus is due for a revamp if employers want to effectively boost morale. Financial incentives may best be directed at employees’ sense of generosity rather than self-interest.

News > Minds at Work > Bonuses More Satisfying When Spent on Others, Study Suggests

“You’re Making Us Look Bad!” Why the Best Cooperators Sometimes Get Punished

Hiding Your True Colors May Make You Feel Morally Tainted

The advice, whether from Shakespeare or a modern self-help guru, is common: Be true to yourself. New research suggests that this drive for authenticity — living in accordance with our sense of self, emotions, and